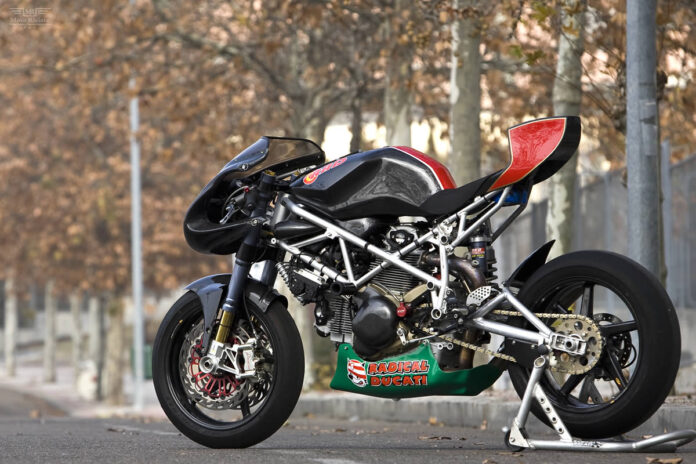 If you are a Ducati fan and thrive for a custom Ducati with style, power and performance look no further than Spanish custom shop Radical Ducati.

Owned and operated by Pepo and his wife, Radical Ducati is a one of a kind custom shop rolling out some of the most elegantly customized Ducati bikes ever. Just a couple of weeks ago we featured their Yamaha XT600, Dirt-Rad, which was their first non Ducati custom bike. Today Pepo is taking us back to their Ducati love introducing ‘RAD02 Pata Negra’, this bike is an evolution of RAD 02 and has been perfected even further by the Spanish tuner. Built for the 2012 race season this custom Ducati Monster aka ‘Rad02 Pata Negra’ features all the last developments from Rad 02. Pepo tells us “The name Pata Negra comes from special pigs, which we use to make the best and world famous Serrano Ham. So in Spain when something is unique, extraordinary and authentic we say that is Pata Negra”.

The structure of this custom Ducati Monster is loaded with aluminum including the frame, rear frame, front bracket and swingarm. I am sure you know where we are heading with this, a lightweight build with flawless performance. Lets put this beauty on the scale and see how much she weighs, with battery, oil and 2 liters of fuel RAD02 Pata Negra’s weight is 138 kg.

At Moto Rivista, Radical Ducati is under 24 hour surveillance, sooner rather than later our friend Pepo will surprise us with their new creation. Until then enjoy some other feature builds from Radical Ducati Carallo Sport, 750 Daytona, Ducati 9½, Rad to Hell or Vendetta!