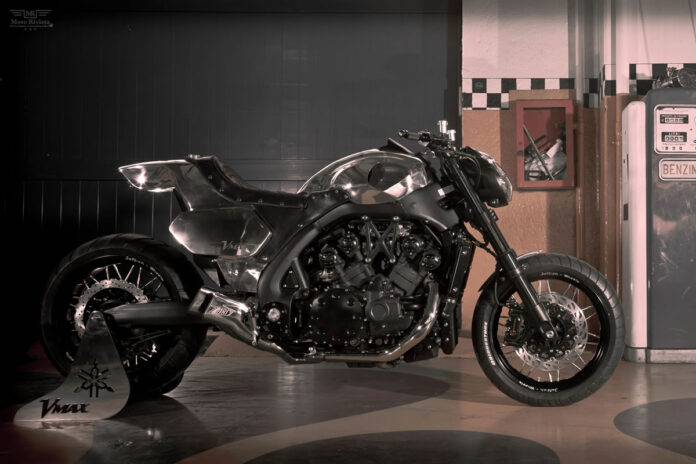 EICMA 2011 saw the unveiling of the Yamaha VMAX Hyper modified bikes. Yamaha had commissioned 3 leading customizers to reinvent the VMAX including Ludovic Lazareth from France, Marcus Walz from Germany and Roland Sands from the United States.

That same event saw Abnormal Cycles, Italy winners of the Best in Show with their magnificent Union. The Best of Show prize was offered by Yamaha Italia, a brand- new VMAX that the Bernareggio-based workshop will customize and become the 4th in the series. Here is a glimpse of that creation just revealed by Samuele Reali and the team at Abnormal Cycles. “The goal was to create something different than the previous interpretations made by the three preparatory foreigners, giving the muscle bike Yamaha neo retro line to enhance the already rich content of the standard model”. The engine didn’t need to undergo any performance changes and the standard exhaust was changed for a ZARD 4-in-2 exhaust designed to match the new lines of the bike. New housing is made from billet FGR, who also signs the pedal controls and massive triple clamps.

The spoked wheels are made by JoNich Wheels, and the braking system was replaced by Discacciati. “The motorcycle was completely torn apart, thanks to the aluminum Metal Bike magician who managed to sew a café racer spirit dress made entirely of aluminum, complete with a side port number.

The evocative silhouette is highlighted by meticulous polishing, Paint made by Zucchelli, and Yamaha Graphic Design Dox performed a special process with multiple layers of aluminum that has a guaranteed result and evokes the speed block typical of the brand with three tuning forks”. Finishing touches included a Rizoma handlebar and a leather solo seat by Wild Hog.