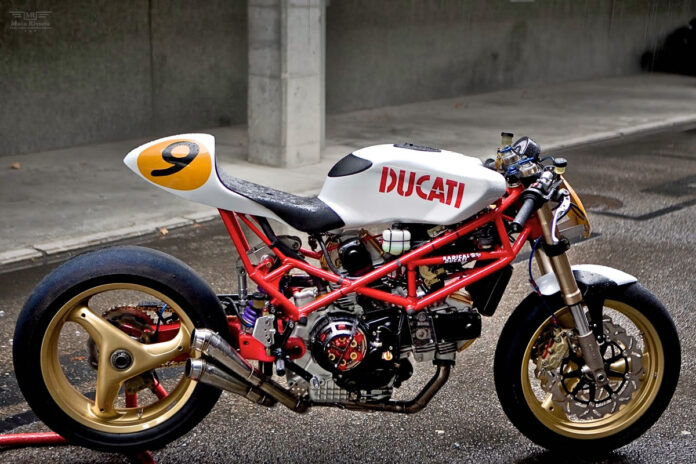 We told you when we did our first Radical Ducati feature there was a plethora of awesome machines we could talk about. It was then surprising for us to learn Radical Ducati are a little company run by Pepo Rosell and his wife.

We are not featuring something new today instead we are taking a look back at Radical Ducati’s 9½, the idea for this magnificent build was inspired by Ducati’s single-cylinder 450 cc race bikes from the 1970′s.

This Spanish beauty is a fusion of past and present, featuring various old and new Ducati parts. The build started with the modified frame from a 97 Monster M900, trapped in the frame is a liquid-cooled Ducati ST2 motor welded directly to the Ducati Monster 900 frame. RAD’s personal favorite, the two independents Wolfman exhaust tubes are attached with beautiful Lasser Megaphones. The Single-sided swingarm attached to the rear wheels are from a Ducati 916 Superbike.

Our personal favorite is that Ducati 999 Superbike fuel tank painted in white with red Ducati decal. This bike is built for performance and therefore it is equipped with all performance parts. The front forks are from Ducati M 900’97 sitting on M 900 front wheel and 916 rear wheel. The 9½ also features Brembo PR19 brake pump, KN air filters and Tomaselli adjustable aluminum clip ons.

Some other Radical parts were joined in the mix as well as from the RAD series, including the RAD 02 Cafe Racer solo seat. Every thing on this 9½ has been designed and fabricated by Radical Ducati.

This bike is a combination of Ducati ST2, Monster 900, Ducati 916 Superbike and the 999 Superbike. The Spanish Ducati surgeon Pepo has raised the bar for the custom Ducati world. What we witness here is part Café Racer, part Streetfighter. Personally to us this is one of the finest modified custom Ducati’s out there, fire up the image gallery and look close and you will see the timeline of Ducati embedded everywhere on this bike.