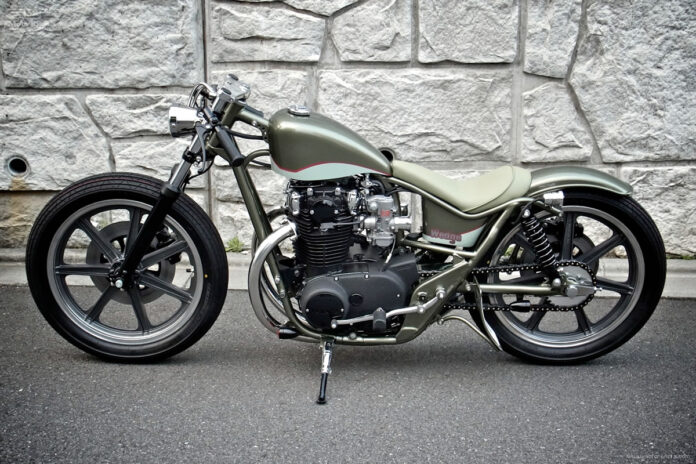 The feast of the day for our custom craving is a custom Yamaha XS650, built by Wedge Paint Factory in Japan. The remarkably engineered XS650 engine has been used far and wide from AMA Professional Dirt Track Racing to helicopters.

The name Wedge Paint Factory is quite self-explanatory, other than custom painting motorcycles these guys have manged to customize a bunch of cool motorcycles. Before we get down to the build lets find out what made the Yamaha XS650 so special. The Wedge Paint Factory approach on their custom Yamaha XS650 is the fusion of bobber and cafe styles. Based on the Yamaha XS650, the stock bike was stripped down to the frame. At the rear the frame was modified to adapt the new style. The fabrication work on this custom Yamaha XS650 includes a hand-fabricated fuel tank, a rear fender and a battery case.

The XS650 engine is breathing through Keihin CR Special Carburetors and has been fitted with a one-off exhaust system. Motor Rock’s 69 headlight was mounted at the front and a 69 taillight at the rear.

The finished Custom Yamaha XS650 rolls on Bridgestone Accolade front and rear tires. Take a look at some other builds from Wedge Paint factory.