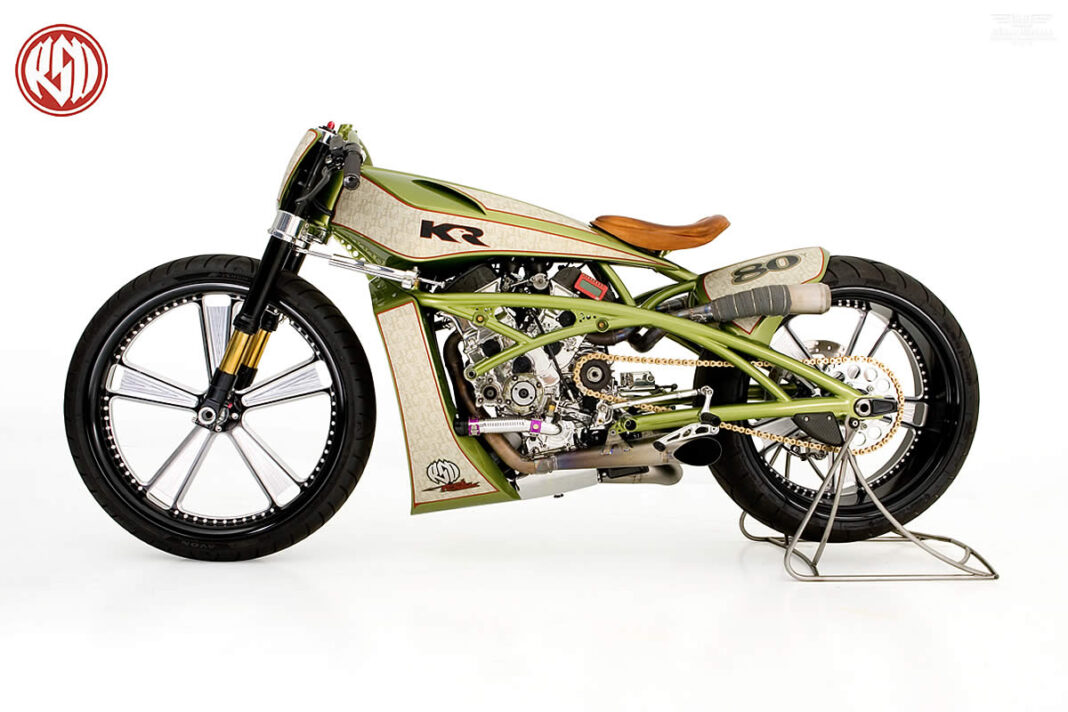 This feature bike is from 2006 when Roland Sands collaborated with racing legend King Kenny Roberts to use one of Team Roberts KRV5 engines for something other than the MotoGP track. This was a first and the end result was this amazing KRV5 Tracker.

Combining Roland Sands design skills with his understanding and experience in racing, the project was bound to be some-thing special. The MotoGP paddocks of Laguna Seca in 2005 is where Roland Sands and Kenny Roberts agreed to go ahead with this project and Roland promised he would deliver the bike a year later. With it taking 9 months to finalize design plans this didn’t leave Roland much time to build this beast! With a deadline to meet the RSD team put their head down and started building the bike at a furious pace. From building a one-off custom frame to starting the bike it took RSD team about 2 months. The engineering gem at the heart of this tracker is powered by a Kenny Roberts V5 MotoGP engine, which has seen four years of MotoGP services and can produce up to 200 horsepower. Another complicated looking part is the engines five hand built titanium exhaust pipes and yes I did said five – please take a look at the photo Gallery for more details.

One of the biggest challenges was using a MotoGP engine and getting it to match the tank, the design of the tank had to look right and match all the lines. The radiator was another piece from Team Roberts material that was placed on this tracker, which was salvaged off the progenitor to the KRV5, Roberts’ 500cc two-stroke MotoGP machine.

The KRV5 Trackers chassis retains the rigid rear suspension properties of its conceptual descendants. At the front the bike features a modified GSXR1000 unit with Contrast Cut Judge wheels and the PM brakes. The forks are locked into place with triple trees, which were fabricated by RSD team. Last but not least the flawless paint job, which was commissioned by Sands personal favorite painter, Chris wood from Airtrix.

This KRV5 Tracker was a competitor at the 2006 AMD World Championships of Custom Bike Building finishing in 9th place!