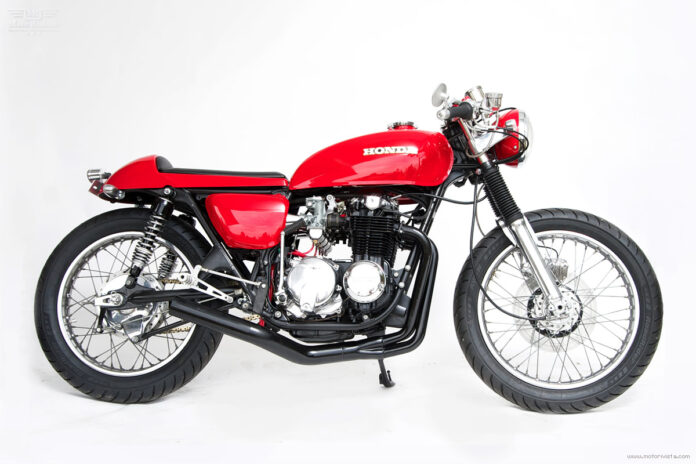 A Honda CB550 is the latest build from Brad Replogle of Cafe Creations & Customs in St. Pete Fl. Transformed, this custom Honda CB550 has received a full restoration while being converted to a Cafe Racer.

The bike started out a couple of months ago as a classic 80s rider, Vetter Rooster fairing, king/queen seat and so on, a real eyesore!

According to Brad “Well as I began to take it apart I saw it was actually very well taken care of and clean under the oil coating from the head gasket leaks. I decided to keep it as stock as I could while doing a Cafe conversion on it.

After a trip to my buddies over at Dime City Cycles to pick up parts it then began. Weight savings were accomplished by removing the stock seat, exhaust, fenders (while retaining the fork brace from the front fender), center stand and replacing the battery with a TruGel battery. The engine was disassembled, painted, polished and resealed with new gaskets. The carbs were detailed and rejetted to match the old school velocity stacks and the header from Carpy. This may be one of the best sounding 550’s on the planet thanks to that exhaust. It is light weight, baffled and patterned after an old Yoshi system. While the polishing wheel was running the front end was polished including the fork legs, caliper and mount, top triple tree, master cylinder, as well as the handlebar controls.”

The front end of this Honda CB550 was reassembled with progressive fork springs and using classic clubman bars, mini gauges mounted on an aluminum mount from DCC. The turn signals were replaced with mini billet units; the front lighting is new including all trim rings. DCC’s new fully indexable rearsets were used in conjunction with the bars up front to give it that racer feel.

The seat is a Thruxton unit from Legendary-Motorcycles, it also uses their integrated pad system. A mini cat eye taillight brings up the rear. A stunning red paint job was applied to this custom Honda CB550 including the stock side covers that often get left off when doing a bike like this. The headlight shell sports the same to brighten the front end a little further.

All the stock electrics remain intact including the harness which was in great shape with the exception of the ground circuit. The finished bike is a classic transformation from Cafe Creations & Customs, red and black on this bike is a hit! Here’s your chance to own this custom Honda CB550 Cafe Racer, available for sale now on Ebay! Get in quick the auction has just over 2 days left!