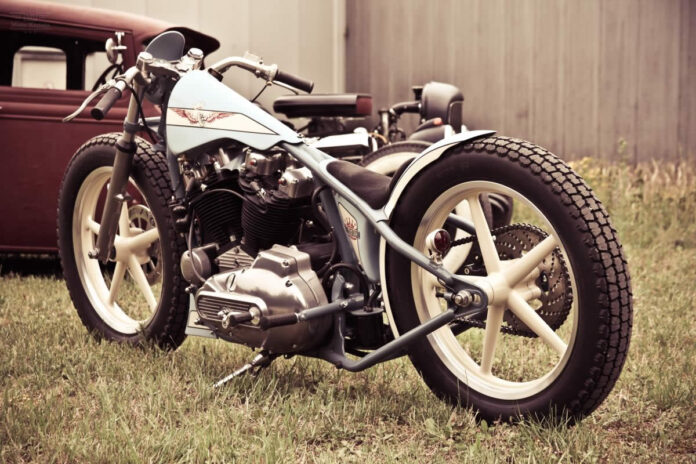 Thunderbike Customs built this ‘Speedfreak’ as a promo bike for King Kerosin, who make great rockabilly clothing for men and women and have a really cool vintage tshirt with the Speedfreak graphics on it. The ‘Speedfreak’ was also a competitor at the 2011 Custom Chrome International European Bike show finishing 2nd behind eventual AMD World Championship Modified Harley Davidson Class winner ‘Union‘, Abnormal Cycles. Based on a 1983 Harley-Davidson Sportster, it has been completely dismantled and was left with just the frame, fork and engine before it was rebuilt. With the theme of old school racer Thunderbike Customs decided on a rigid frame and the rear was changed to match.

The bike also has reshaped and rounded cylinder heads and Kustom-tech sprocket brake. The bike rolls on 19-inch five-spoke cast wheels taken from a Harley-Davidson Rocker. Speedfreak also features a number of one of a kind hand fabricated parts designed specifically to fit the old school race style including the gas and oil tanks, fenders, covers and the hidden battery.

We absolutely love the paint job, set in flattering shades of cream and dipped delicate blue. This was done by Ingo Kruse from Kruse Design who is also responsible for the paint work on the Thunderbike Customs AMD World Championship bikes.

A stand out in the crowds of the custom bike world, Thunderbike Customs ‘Speedfreak’ hits all the notes from its flawless hand fabrication to immaculate airbrushing and the iconic logos, this motorbike is an absolute old school beauty!