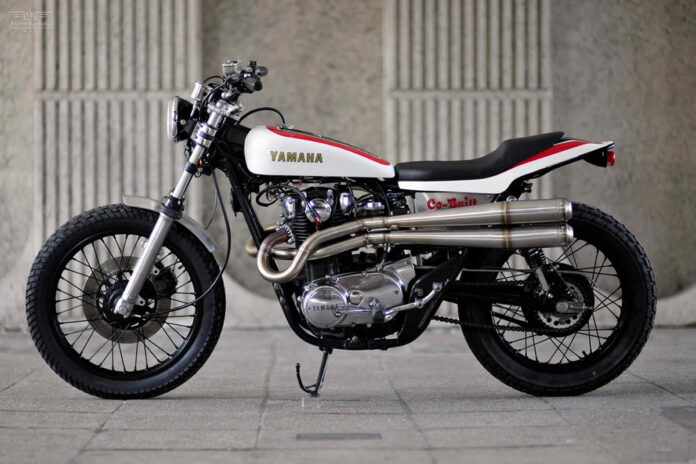 Drogo Michie is an acclaimed art director who wanted a nice and simple bike for hustling the streets of London.

With that in mind, what bike would you select? Drogo decided to go with a stock 1978 Yamaha Xs650, which he took to the Red Max Speed Shop for a makeover. We have already featured another bike from Red Max Speed Shop (Harley Sportster Cafe Racer) so we knew Drogo’s project was in good hands. According to Red Max the idea was to give this bike a full Street Tracker makeover. To begin with Red Max fabbed the brackets and the sub frame. All the extra brackets were removed and the subframe was made to fit a hand made Champion seat and modded Sparto rear lamp. Red Max has also changed the line of this Street Tracker by using a new Champion saddle and a Trackmaster tank.

The back of the bike has been rebuilt, and is fitted with Koni shock absorbers. The marked Renthal handlebars have given the bike a different riding position. On the left of this Yamaha Xs650 is a new racing style exhaust system, which was produced by Oxford based – Co-Built Motorcycles. In the end Red Max Speed Shop put this beauty on the dyno and gained 10 horsepower .

The bike was painted according to Drogo’s taste, which is inspired by the colors of the BSA of the 70s dirt track. After all the customization and fabrication this Yamaha Xs650 still preserves the qualities and reliability of the good old Japanese engine.

What we have just witnessed is a fantastic build from Red Max Speed Shop, with just a little originality and some small details you can achieve a decent looking bike.