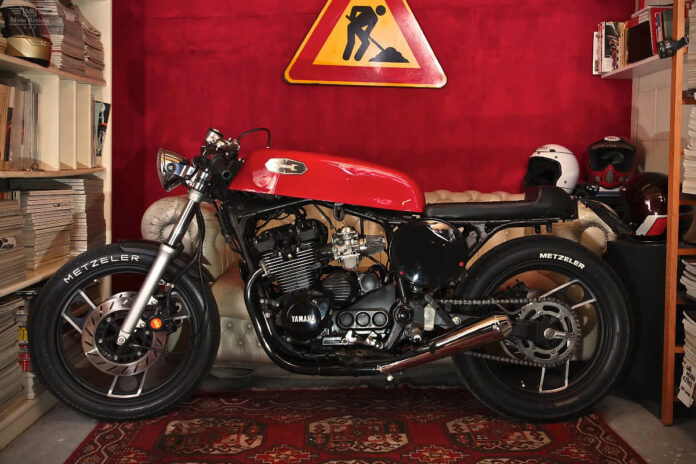 Emporio Elaborazioni Meccaniche or simply EE is a custom workshop in Rome, Italy. A collective of 3 DIY and a custom fan, Andrea ‘Dopz’, Leonardo ‘Leo’, Giuliano ‘Schizzo’ and a fourth hidden member named ‘The unnamed’! Now curiosity has me intrigued with this unnamed member, but that mystery is for another day!!

These guys come from all different professions, a graphic designer, tool shop and silverware shop. They also have different moto attitudes endure, street and travel. What binds them all together is they all love short, fast, light, vintage looking motorbikes, and they decided to bring the hidden vintage side of motorbikes and reuse things they find around.

Todays spotlight is on their 1984 Yamaha XJ600 Cafe called ‘Striscia Nera’ (Black Stripe). Here’s what Andrea ‘Dopz’ tells us about the build process. “The idea was to build a Cafè/City bike which was light, sporty, elegant and useful for traffic. This Yamaha XJ600 was very hard to do because to begin with we found a cheap but very rusted motorbike. Making any changes to the frame was quite difficult since the entire design of this street bike is from eighties, so all the plastic stuff went and we cut, rebuilt and welded a lot of parts of the frame (front and back)

The hardest part of the ‘Striscia Nera’ was the frame, we had to cut a lot and weld different new parts. The original design had the back frame a bit tilted upwards, so we made a cut into the frame to insert new iron and made it straight for our hand made (with memory foam) seat. Another tricky part was the front frame with a lot of empty spaces caused by the plastic motorcycle fairing. We welded different new reinforcement to replace the key position (now on the side of the bike), to reinforce the frame and to close those holes.

We improved the carburetors, simplified the electric cable, removed the air box, rebuilt part of the frame and the seat. All the front light block has been replaced with a unique simple speedo placed in the key hole which was relocated. The key was cut and replaced with a battery keyswitch on the side on the XJ. To complete the bike we reused a lot of strange parts for example parts of a helmet, Ikea stuff, some pieces of a mattress and knob drawers.

The result is a very fast and easy to use custom Yamaha XJ600, we love the thin design and the very aggressive sound!” Stay tuned for more from the boys from Rome!