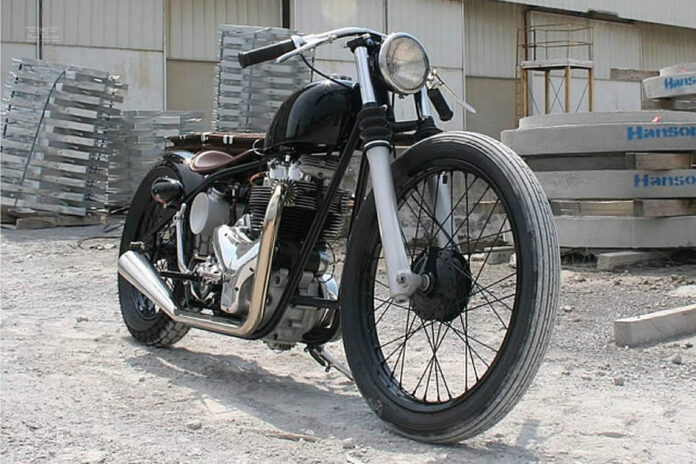 This is the 4th bike we have featured from Clay Rathburn, previously we have featured Velvet underground and NOTHIN’ FANCY. Seems like we can’t get enough of Clays bikes, and trust me there are more to come.

According to Clay this 1958 BSA A10 was the first official Atom Bomb bike. From what we know the work on this bike started before the rise of ABC. Clay purchased this 1958 BSA A10 over the Internet, when it arrived the condition of this bike was a bit scary, destroyed stock frame and locked up engine full of salt water. Perhaps the advertised description did not match? On this 1958 BSA A10 there was not much to kick-start this project, except the engine and the transmission cases. The engine was reworked and carefully assembled. Since the original frame was totally damaged Clay decided to fabricate the frame too. To give this bike a Hot Rod look the tank was reshaped to make it look narrow. Restored forks and the mix of modified parts from Honda motorcycles. Exhaust and bars were hand fabricated from stainless steel. Bob Newby Racing belt drive ads the power to the transmission. Last but not least the quality finish paint job applied by Chris Mizak.

According to Clay it took 900 hours of blood and sweat to make this bike what it is today. The Black Bike was on the cover of issue #8 Greasy Kulture Magazine and was also featured in the issue #83 of the Horse Backstreet Choppers.