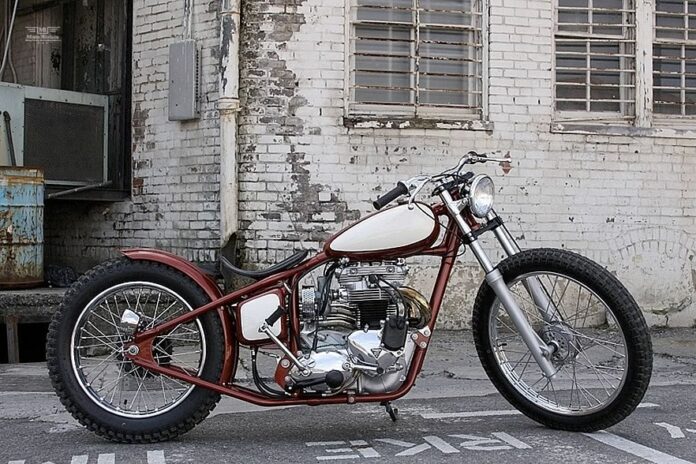 The son of a hot rodder, Clay grew up with a torch in his hand. After time spent as an automotive technician and a successful career as a race car fabricator and engine builder, Clay turned his professional attention to hot rods. As the pickup project was winding down in late 2007, Clay rediscovered his childhood love of motorcycles, and began building the black BSA. Clay’s style of mixing the elegance of simplicity and an obsessive attention to detail, proved well suited to motorcycles.

This 1970 Triumph TR6R arrived at Atom Bomb as a basket case engine with matching front frame loop. The engine was fully rebuilt with a new cylinder, pistons and crank. High compression oversize pistons now reside in the cylinders, and the head has been mildly ported.

NOTHIN’ FANCY continues the Atom Bomb trend of distilling a motorcycle down to the barest essentials, blending form and function into a very subtle, very custom package.

NOTHIN’ FANCY was a 2009 project and it participated at the 2009 Detroit Autorama, where the bike received the “Inspiration Award” from Dan Webb, as well as the “Sickest Cycle” award. ‘NOTHIN’ FANCY was featured in issue 127 of Iron Horse Magazine.

We have also featured two other motorbikes from Atom Bomb Custom, Doctor Who and Velvet Underground.