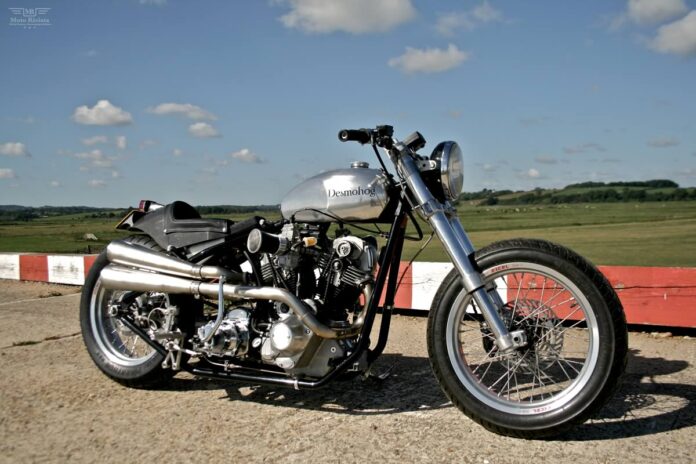 Crossbreed Cycles, East Sussex is the one man operation of Chris Barber. Today we are taking a closer look at ‘Desmohog’ a Harley big twin bottom end with Ducati 900ss cylinder heads.

Whenever I see something a little out of the ordinary it’s interesting to hear where on earth the idea came from! Chris helps us get a better understanding of his build “I did this project as just an engine curiosity, I had no idea of what I’d put it in, I’d seen a few hybrids like Matchless headed HDs and HD heads on NSU singles and thought about what I could cross with an easily available aftermarket HD style (Ultima) bottom end, I’d played a bit with Ducatis and knew I could make them fit……so that’s how it all started.”

Chris does most of the work himself, “Axtell did make the cylinders but today I’d make them myself. I made the exhaust system but I did buy the cones, although I have made a cone rolling machine and now roll my own….I try to do everything myself, that’s why many of my bikes aren’t painted because I hate painting! The largest challenge was arranging the gear/belt drive for the heads, I’d only been using CAD software for about a year, so the learning curve was steep but there’s nothing like dropping yourself in the deep end, to speed up learning. At the end of the day the finished product was very much a prototype, if I built another one I’d do things differently but I don’t like going over old ground, so it will remain a one-off. I’d like to build a short stroke big bore HD lump with 4-valve Jawa speedway heads but I’m not sure I really want to do anything HD related again; I’m disillusioned with the whole HD custom scene, I’d rather be an outsider and build exactly what I want to build, like the Maserati bike for example.”

Is the finished bike as Chris had hoped? “The bike is meant to be a cross between bobber and cafe racer, I think this has been achieved but as a result the style is a bit awkward.”

Chris has ‘Crossbred’ a Harley with Ducati successfully, Desmohog is an incredible mix of beauty and the beast. Looking at the finished Desmohog you can clearly see where passion can take you.