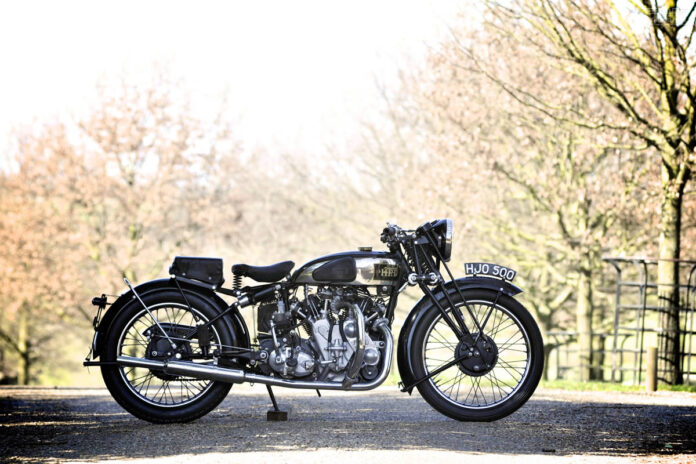 Today we are taking a journey back in time with this remarkably designed and engineered 1939 Vincent HRD Series A Rapide.

Before I even get down to the details of this bike the first thing that pops in my head is sheer awe and wonder as to what and how in the 1930’s someone came up with the idea to build something so remarkable. Legend has it Howard Raymond Davies dreamed of building the perfect motorcycle whilst being held captive in a German prison. I guess this is the reason Vintage motorcycles have always held a special place in my heart. Back in those days resources were limited, not just physical but also digital communication and brainstorming opportunities.

Lets get back to the 21st century and look at the technology available, we can draw influences from a number of different mediums. We can easily see what others are doing or have done, so the question must be asked are we as creative as they were back in the days when they were building new motorcycles like this Vincent HRD? Will today’s motorcycles be remembered in 70, 80, 90, 100 years and looked back upon as being something outstanding?

I hope in 100 years someone will repeat these questions and will talk about the motorcycles of our time. The Vincent HRD came to existence in 1928 when Phillip C Vincent acquired the name, jigs, tools and patterns of the recently liquidated HRD Company. HRD was founded by Howard Raymond Davies who was also winner at the Isle of Man TT. Vincent bikes relied on proprietary engines but the increasing disappointment with suppliers led Vincent-HRD to create it’s own engine in 1934. A 500cc high-camshaft overhead-valve single, this all-new power unit was designed jointly by PCV and his Chief Engineer Phil Irving.

Legend has it that Irving accidentally put a side-view tracing of the Vincent 500 motor the wrong way up on top of an equally sized drawing of the same view of the same motor, and saw, moving the tracing so the crankshafts and idler gears coincided, that the result looked like a possible design for a V-twin. This resulted in the 47.5° V twin which appeared in 1936. The Vincent V-twin motorcycle incorporated a number of new and pioneering ideas, some of which were more triumphant than others.

The Vincent HRD Series A Rapide was first introduced in October 1936. Its frame was of brazed lug construction, based on the Comet design but extended to accommodate the longer V-twin engine. The Series-A had external oil lines and a separate gearbox. Back then the Vincent 998 cc Series A Rapide cost $600, produced 45 hp (34 kW), and was capable of 110 miles per hour (180 km/h).

Lets get down to this bike, this 1939 Vincent HRD 998cc Series A Rapide is due to be auctioned by Bonham’s, this motorcycle is a once in a lifetime opportunity for collectors to own a piece of history, there is a reason the expected selling price is the equivalent of a house.

It was first registered on 24th June 1939; this mega rare Vincent HRD 998cc Series A Rapide is one of the last of its kind to leave the factory before production was ceased.  The engine was rebuilt in the 1970’s and comes with the records of further restoration. Several of the last bikes made before the war featured steel hubs, which went into production in cast alloy for all the Post-War machines.