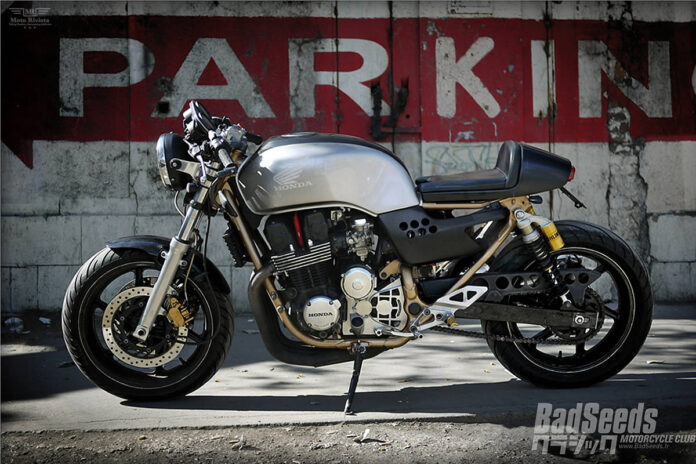 The Cafe racer style started back in 1960 in Britain. Back then most of the Cafe Racers were built around iconic British motorcycle brands.

But things are changing rapidly in the 21-century with so many motorbike manufacturers on the market, choices for any one building a Cafe Racer are extensive. Japanese motorbikes are the perfect fit for the base of the Cafe Racer build.  I personally like the old classic Honda motorcycles and one in particular the Honda CB750.

It’s not just me who likes the Honda CB750; French custom motorbike builder from Bad Seeds Motorcycle Club and graphic designer Olivier Renouf is also a fan of the Honda CB750.

According to Olivier “I have been drawing motorcycles since the age of 5. I have also been a good son until the age of 28 when I got my motorcycle-driving license. I bought this stock Honda CB750 in a Honda shop in Paris called Boulmich’Moto. After purchasing the bike I showed the photoshop simulation ( See here ) to Didier (the boss) and he liked it. When I ask him if he knows a place where I can turn the photoshop simulation into the custom bike, his answer was right here. Since then it took almost 7 months working every Saturday on the bike”.

The build of BS1 Honda CB750 started with stripping of the bike down to the frame. Once the bike was stripped down, Olivier attacked the frame with a grinder and chopped it from the rear. At the front the bike was fitted with Tarozzi handlebar. The stock engine was assembled with a K&N air filter and was fitted with bigger main Jets and a 4 in 1 exhaust system. At the rear the stock foot pegs were replaced with GSX-R, Olivier also made a hand fabricated battery box.

Olivier says “The favorite part of this build was meeting very cool people including the Boulmich’Moto team especially Didier who is a good friend now, people in the motorcycle yard, the painter and the saddler. Modifying the stock frame and seeing the result with modified Manx seat was also a highlight.

There is something funny about this bike: this basic roadster really had an uncommon destiny, the owner before me was a guy working for Honda France, he bought it to race on the track during the week ends. He used to race on a track close to Paris called Circuit Carole. Best time ever on this track is 1 minute 00’512″ and the guy with the seven fifty ran in 1 minute 14″ with a lot of sparkles!”