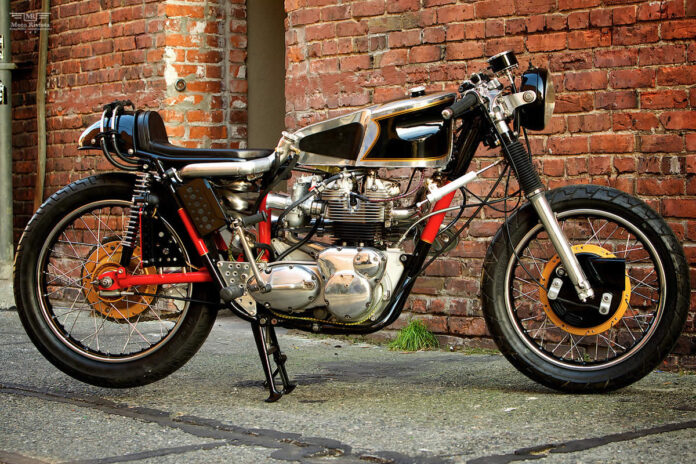 A lot has happened since we first featured ‘War Crimes’ from Super Rat. The brothers have put together an online community with a awesome website, clothing (coming soon), events, news, videos and of course pictures of all the Super Rat bikes.

We also know a bit of background about the brothers Mark and Carl Bjorkland who say growing up they loved skateboarding, custom bikes, custom cars and anything old school fast and hand built. The passion for all things custom they both shared is what led them to establish Super Rat. The brothers build one off customs and push the limits for speed and performance with what can only be referred to as hand crafted rolling works of art.

After spending time browsing the new website Moto Rivista’s spotlight has stopped on Super Rat’s ‘Triumph Trident Cafe Racer’. It all started when Carl and his friend Young were mucking about Café racers, and Young encouraged him to build a Café Racer out of his trident basket which had been lurking around the shop for years. While Young was going through the motor, Carl started to build this bike from its tail, which was a bit unusual and made it hard to visually reference the bike. The tailpiece came from a Model T headlight which was split in half and the edges were wrapped with ¼ inch round stock. This tailpiece also holds an additional oil filter fitted nicely inside.

For the tank Carl started with the tunnel and base, making sure to build a little hollow cubby to hide the coil and electrics into. Carl describes himself as not being great with sheet metal shaping, but looking at the tank you would not believe that! In our previous War Crimes article we talked about their kick ass exhaust build which is a Bjorkland brothers specialty. To build the exhaust for this ‘Triumph Trident’ Cafe Racer, Carl started by milling pipes for the 3 into 1, he also built the mufflers out of stainless sheet metal, perforated steel and muffler packing.

Most of the miscellaneous stuff was purchased from Criaglist and eBay and whatever they couldn’t find was built in-house. The battery box and license plate were in-house hand fabricated out of aluminum. Carl’s brother Mark wired the bike with cloth wire from Young’s choppers. The brothers dropped the fork tubes by 2-inches and made some brass and copper brackets for steering stabilizing, head steadies and gauge mount. In the end Young did all the paint and stripping, he also helped out with the assembly.

What we witness here is a beautiful Triumph Trident Cafe Racer, designed for style and built for performance! The bike was also featured in ‘The Horse – Backstreet Choppers’ magazine

For more info on this build check out the video (Click here) ‘Super Rat – Making of the Trident Cafe Racer’.