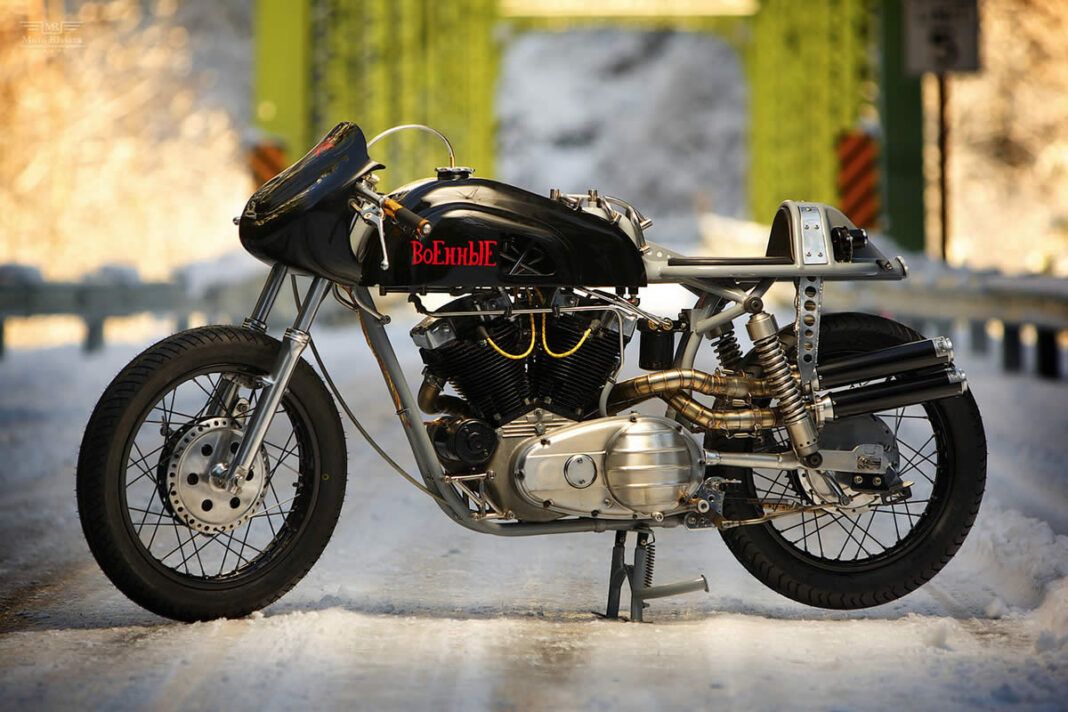 We don’t know too much about these guys but what we do know is they have turned out some truly awesome machines. These are the guys that are going to do the hard yards, not just dream about doing something they will put in the time and effort to make it happen and with great skill.

‘War Crimes’ is a Cafe Racer based on a 1966 Harley Davidson XLCH Ironhead. Originally purchased for $900USD and in parts, apparently in running condition prior to be pulled apart but in desperate need of some TLC. The intention was to transform it into a bobber, the guys at Super Rat ended up shelving it for years until it was finally dusted off and transformed into this cool Cafe Racer. The top end of the Ironhead engine has been re-honed with a brand new gasket. The frame was shaved and molded, all the unnecessary tabs were removed to provide a smooth and clean finish. The carburetors are rebuilt Amal Carbs giving the War Crimes an English flair, to accept the carburetors to the engine Carl had to modify a stainless 2-into-1 intake.

One of our favorite parts of this Café Racer build is the magnificent custom stainless steel exhaust system. The level of craftsmanship on this exhaust is rare, it is hand made out of 22-gauge stainless steel sheet metal. Making this exhaust was no easy task, Carl had to hand chop 80 pieces of sheet metal and then slip-rolled all of them to precisely fit it together. It took a lot of time to make sure the heat stayed consistent during the process to ensure the coloring would look the same through out the entire exhaust system.

The gas tank of War Crimes is an eyeball tracker; Carl spent around 45 hours crafting the stainless steel motor mounts on the top and front of the engine. Carl also hollowed out the left side of the tank so that people could see the level of craftsmanship and details of the mounts straight through the side of the tank to the frame.

On most of the Café Racer bikes the rear tails have hidden artistic aspects of the frame and are covered with sheet-metal or bodywork. The brothers have taken quite an interesting approach with the rear tail of the bike, leaving the hand crafted tubular rear tail section uncovered thus giving it a deconstructed and inverted look. The War Crimes fairing is made from 22-gauge sheet metal and has vertical slots cut in the front of it for the light to illuminate out of.

The paint design was applied by Mark and was inspired by a Russian Military Theme. The Word ‘War Crimes’ is stenciled on the side of the tank along with the hammer and sickle on the fairing.

The bike was the featured cover on the July 2011 Issue of Hot Bike Magazine and also a featured article in The Horse (Backstreet Choppers) Magazine.