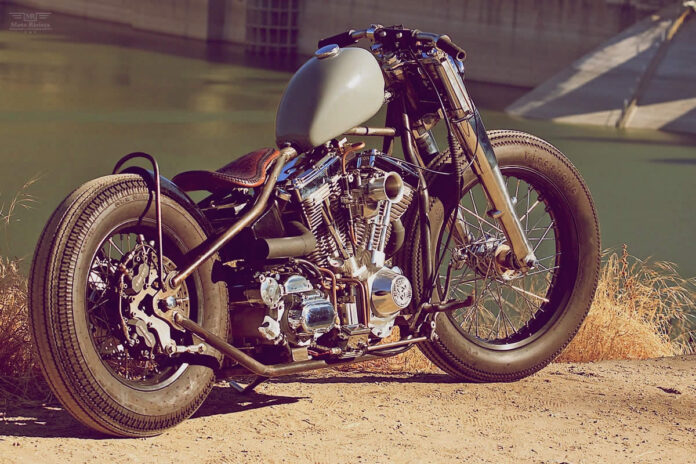 The bike and builder we are featuring today have been on quite a journey to finish his build. Working many nights at a Los Angeles nightclub as a bar tender, Malcolm Giblin worked hard to save every dollar to build his 2006 custom Bobber.

To begin with Malcolm started ordering parts online with his newly acquired wealth! By the time Malcolm was finished collecting parts he realized that chrome was shining from every corner of his living room and some of the parts didn’t fit together. Despite a few bad decisions along the way, he made a few good ones and one of them was purchasing a brand new 69ci S&S monster motor. With hard work and lots of buying and returning parts, Malcolm got a roller together. Not enough to roll this bike, the front hub on the leftover was from the last resurrection of Indian wheels which didn’t fit on the wide glide axel. Lucky Malcolm had an Uncle Dave with a machine shop, who helped him to chop a custom chromoly axle to fit up his front wheel.

Malcolm also received a crash course from his Uncle Dave and access to his arsenal of odd machines and tools. Malcolm realized that everything he needed to make his a dream reality was right before his eyes within his Uncle’s shop. The build begins with Malcolm making all sorts of crazy handmade parts, following the trend from that time bolting unnecessary garbage all over his bike. All sorts of crazy ideas made the way to Malcolm’s bike! When it finally came time to start the bike the oil tanks spewed hot frothy oil out of the vents within a few minutes of riding.

The theme from this build definitely trial and error! With a little patience and a lot hard work, and some help from Uncle Dave, Malcolm Giblin’s custom Bobber was ready to rock the streets of Vegas!