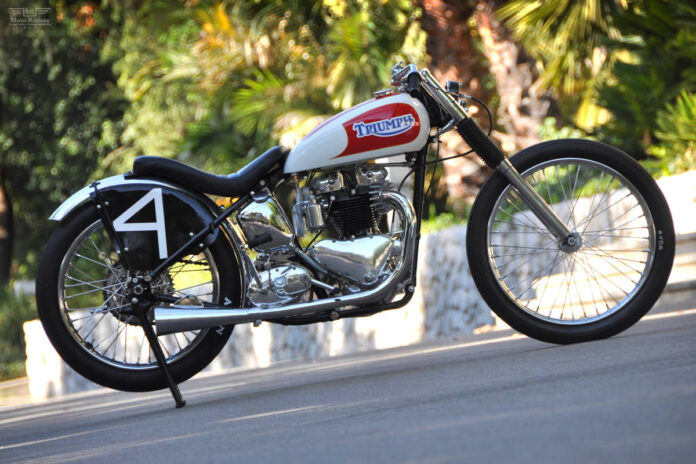 Motorcycle racing was Bobby Sirkegian’s destiny. When he was 6 he was riding in Pee-Wee races and by the time he was 13 he had become the first AMA/NHRA Grand National Champion.

Bobby’s passion for motorcycle’s ran in his blood, the first-born son of a board-track and motorcycle racing pioneer, Bob Sr. During his time Bob Sr was one of the few professional board-track racers in the world. As a young teenage racer Bobby Sirkegian had it all, his Triumph drag bikes were tuned and sponsored by his father’s Los Angeles dealership. Success was almost immediate for Bobby, with his quick reflexes and superior power-to-weight ratio, and a helpful hand from his dad to balance the bike behind the start line!!

Despite Bobby’s young age his drag racing abilities meant Bonneville officials gave him special permission to run at Bonneville Speed Week in 1953. In the 650cc class Bobby lined up on a bike which was built along the same lines as his drag racers. The Bike had over bored cylinders and a big-bearing crankshaft with special-grind Iskenderian camshafts and lifters, and lightened, narrowed timing gears. A 3-gallon fuel tank from Triumph’s 3T model carried enough gas for the salt flats speed runs.

Family friend Rollie Free gave Sirkegian a pair of his 3×20-inch Avon file tread rear tires, which had been especially developed for high speed work at Bonneville. Although Bobby’s 122-mph pass on a 650 didn’t set any class records he was awarded for being the youngest drag racing gun ever on the Bonneville Salt Flats.

Although Bobby Sirkegian didn’t race at Bonneville again he continued drag racing, winning hundreds of trophies and setting numerous track records. Bobby held on to his Bonneville 1951 Triumph Thunderbird 650 and gave the bike a full restoration (pictured). The restored bike features one of those rare 20-inch Rollie Free Avon rear land-speed tires and was auctioned by Bonhams with a final sale price of US$ 27,495 inc. premium.