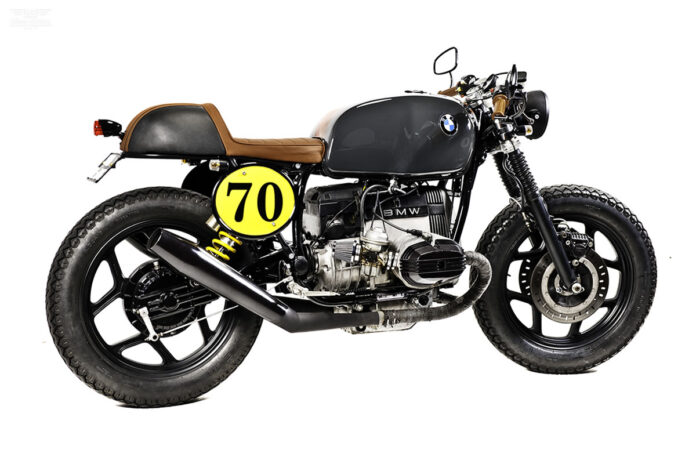 In the right hand passion always has its way to show and shine, like this Custom BMW R80 aka Dark Law, built by Portugal based Ton-up Garage.

Ton-up Garage was born from the friendship of two motorcycle enthusiasts, Pedro and Daniel. According to the guys “We want to create new interpretations of certain motorcycles that exist in the market, by improving and simplifying these motorcycles within the lifestyle Ton-up Garage wants to establish”. As far as he can remember Daniel Cabral has been a motorcycle rider. He’s a technical designer, creative, photographer, video director and producer, who works in the fashion world. He loves collectable cars and motorcycles and he wants to make his work his life style.

Pedro Oliveira has always been passionate about the world of engines and speed. “I love everything that has an engine on it, cars, boats, planes and especially motorcycles. Today I am a bit more selective and I’m basically passionate about vehicles with character, design and personality”.

The base for this custom BMW R80 project was a police bike from the 80’s which originally had big fairings, bags etc. The stock R80 engine was in good condition and was fitted with a new air filter. The stock frame was chopped in the back to adapt a single seat unit, which was upholstered with brown and dark silver leather. The fuel tank was also painted with a mix of brown and dark silver and the rest was painted with either gloss or matte black.

The biggest challenge of the build was the suspensions, especially the rear unit. The guys have shortened the suspensions and used rear shocks from a superbike. They have also made new gearbox selectors, rear brake pedal as well as the foot stands. The exhausts on this custom beauty have been designed and exclusively made for this bike.

The finished Custom BMW R80 is a true reflection of passion and desire, Pedro & Daniel have managed to pull a classic creation out of an old police bike.