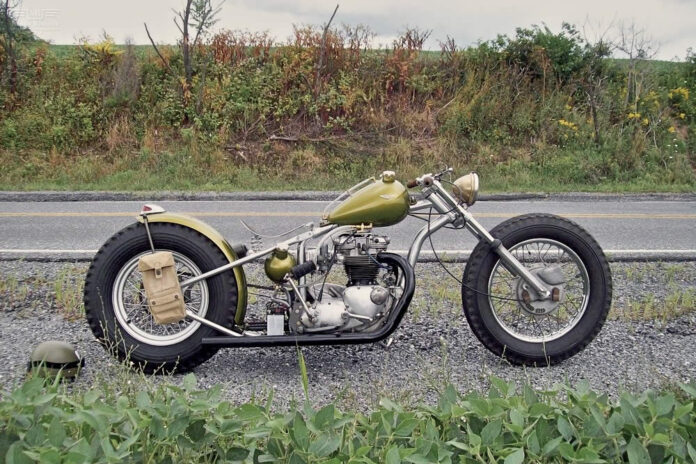 The ‘Saving Grace’ Triumph bobber is our feature of the day; the bike was built by Jeff from Saint Motor Company, Maryland.

Jeff has launched his ‘Saint Motor Company’ branching out from ‘Saint Motorbikes’ and offering a combination of Motorbike, Bicycle and Skate products. There will also be some apparel and art, Jeff is aiming to cater for anyone who has a lifestyle on the move be it human or motor powered!

According to Jeff when he saw this poor Triumph on Criaglist, it reminded him of the Dads Harley in Ghost Rider, named Grace. “Black with flames, long front end, his/hers seat, sissy bar…old school cool. It was a mess” And there he had the name for his project ‘Saving Grace’.

The build started with the frame getting cleaned and sandblasted, the entire down tube was removed and replaced. The top of the frame was lowered down and Jeff decided to do a gooseneck and go 45 degrees. This frame went through a lot of angle adjustment but the end result was rewarding for Jeff. The Triumph engine was cleaned and reassembled, the long tube .120 wall pipes are the bomb and sound deep and insane.

The alien tanks were chopped and tunneled out to make it deeper, and were decorated with Serviceman air emblems from the air force. The rear fender was made out of an early Ford tire ring. Jeff made up the rear fender mounts and struts, and mounted a bitching 1919 caddy headlight from LackLuster.

Saving Grace rolls on 19-inch front and 16-inch rear tire, measuring out about 29” tall at the front and 28” at the rear, perfect for ground clearance. The frame was chromed powder coated, and the bike was painted in rescue green. “The gauge is great, was so cool to pour gas in & watch it for the first time. That’s always one of my things when I ride around, wondering how much gas I have” Says Jeff.

What started off as a chopper style ugly bike, was transformed into a rolling piece of art. We love the fine touches including the brass Serviceman air emblems, clear fuel lines and single sheet saddle. The entire geometry and overall look of this triumph is just amazing. Without a doubt this bike is an eyeball catcher with enough details to keep you wandering around it in circles.

Drop a comment and let us know what you think about this motorbike….