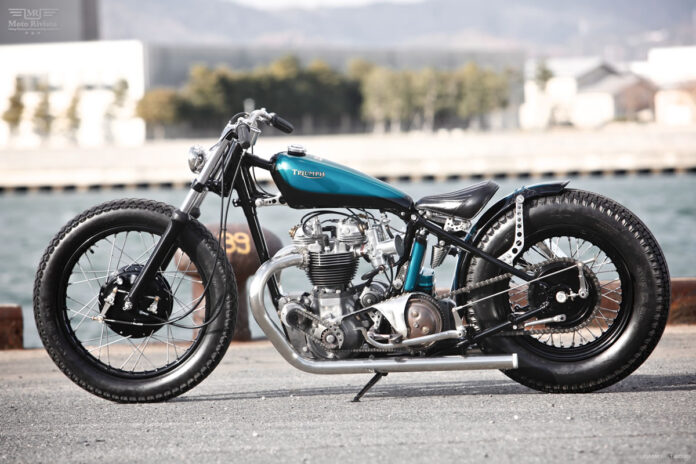 The breeze of custom refreshment from Japan has arrived, a Triumph 6T Thunderbird aka Lizard tail. This British classic iron has been beautifully modified by Kengo Kimura at Heiwa Motorcycle.

While the mainstream custom motorbike builders probably wouldn’t dare to mess around with the British classic motorcycles. The guys at Heiwa Motorcycle Japan look at these old British classic bikes from a different prospective. Their idea of customizing a British classic is to not just keep the classic lines of the factory bike but give it a Heiwa style custom refreshment! I have seen plenty of restoration work and yes they look great, but sometimes I don’t mind snapping out of the old school factory restoration and looking at something unusual. Like this extremely modified 1953 Triumph 6T Thunderbird custom, Lizard tail. Heiwa Motorcycle’s customization style is distinctive, once you have seen their custom work you can easily spot them anywhere.

Based on a stock 1953 Triumph 6T Thunderbird, the stock bike was stripped down to the engine, which has been completely overhauled. The Triumph 6T Thunderbird features a modified frame to adapt the new style. The primary drive has gone through major surgery, it was chopped and opened revealing the internal mechanicals. The engine and the transmission are decorated with some bronze processing work which adds some old school looks to this build. The 2 in 2 exhaust system was hand fabricated by Heiwa Motorcycle.

At the front this Triumph 6T Thunderbird, Lizard tail features a one-off production handlebar fitted with AMAL grips. The bronze decorated vintage fog light and a mini speedo meter were mounted at the front. The fabrication work on this build includes a one-off hand fabricated fuel tank and a one-off rear fender. The seat of this Triumph 6T Thunderbird custom has been remarkably engineered and shows the true craftsmanship of Heiwa motorcycles.

The finished Triumph 6T Thunderbird rolls on 19-inch spoked wheels wrapped in AVON SM-MK2 tires. There is a lot more work involved in this build but this is the limit with how far we can go. We wish we could tell all the intricate details but for now the images will need to tell the untold story!