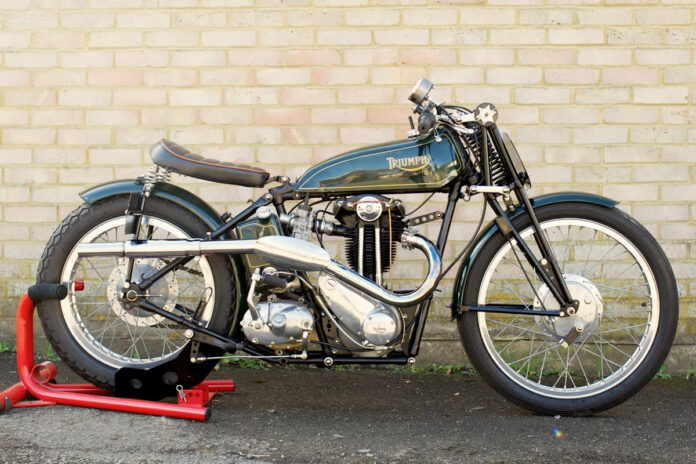 On his arrival at Triumph Valentine started by transforming Triumphs aging range. At Triumph Valentine developed the vertical twin and range of singles, including a 150cc two-stroke and 250, 350 and 500cc four-strokes, with Edward Turner. Valentine also designed a solid parallel twin, the Model 6/1, introduced in 1933 for the ’34 season. The 6/1 was a heavyweight, OHV, 70mm x 84mm, 649cc machine intended largely for sidecar work; an interesting and technically well-conceived, wet-sump design with a bolt-on gearbox, a single camshaft at the rear of the cylinder barrels (an arrangement later typified by BSA twins), a single carburetor, and a helically-geared primary drive with no intermediate gear—which meant that the engine ran backwards.

The feature of today is a 1935 Triumph 350cc Sprint Special; this beautiful machine was in 90% restored state when the current vendor purchased it. Since then this machine was fully re-commissioned, and was rebuilt as a sprinter with all electrics removed to lighten this beauty. Most of the parts have been repainted and the seat was recovered and a speedometer was fitted.

The engine has been completely rebuilt to its original glory, while the gearbox is a later addition with closer ratios. The beautiful alloy tank holds up to 4 litres and the oil tank approximately 2 litres. The clutch on this Triumph 350cc Sprint Special is standard and runs open. The other remarkable features include alloy wheel rims, REH conical hubs and rear-set footrests.