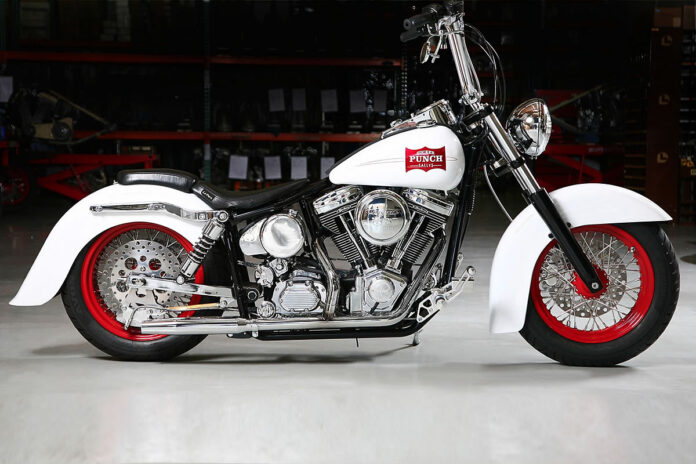 Sucker Punch Sally’s Swinger is the answer to all the requests for a suspension bike but done their way.

This is the motorcycle you want for a long trip, and it can be accessorized with a windshield, highway bars and saddlebags. It features a larger power plant and a two into one exhaust combination that make it ideal for highway travel and nimble for around town rides.

The Swinger feels much less polished than a Harley, but has an elemental, raw edge that you’d expect from bike builders with Sucker Punch Sally’s DNA. The 1445cc Revtech engine punches out the horsepower hard and builds rpm fast, its 2-1 exhaust pipe letting the motor breathe quite nicely. Throttle response is precise and if you’re lazy, there’s plenty of torque to waft along on. The handling is adequate; while the rear shocks do a solid job of soaking up the bumps and the ride’s smooth. There’s a touch of vagueness in the chassis and as the bike rides so low (adding to its style) ground clearance is limited. But rolling on smooth, sinuous asphalt the Swinger feels just fine; so sit back on those ape-hangers, watch the world slip by and of course watch the world watching you. Wherever it goes, the Swinger seems to get attention – it’s that kind of bike.

At $25,000 list, relative to other motorcycles from major manufacturers, the Swinger seems and is, expensive. But regarded in isolation, as a hand-built (your way) bike that’s fully road legal, with a warranty and dealer back-up, it might just be reasonable. If you’ve gotta have it, then you’ve gotta have it.