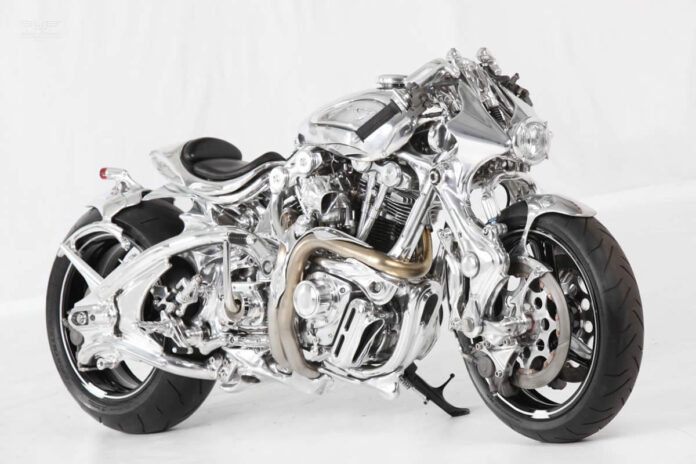 The bike clearly has a different look to what we have featured before and is sure to receive mixed responses. Knowing the creative intention certainly gives the bike some perspective, Ken wanted to build a bike that represented in metal a Cheetah chasing its pray across the African Savannah. The design was meant to make it look as if it has muscles rippling under its metal skin as it travels down the road. Do you think it achieved this? Now we have no idea how much it costs to build a machine like this but what we do know is it took 3.5 long years. Time well spent when the result is an AMD World Championship winning mean machine.

The build of Tavax 2011V started with S&S Shovelhead 93 engine with 5 speed tranny and primary belt drive. The frame on this beast is Tavax original with 25-degree rake; Tavax also built the front end on the bike and the swingarm. Tavax 2011V rolls on 17 inch modified Marchesini front and rear wheels wrapped with Dunlop tires, and floating rotors and Lockheed brake calipers. Congratulations to Ken on receiving such a prestigious title – 2011 AMD World Champion (Freestyle Class). I’m sure we will be seeing more from Ken in the future!