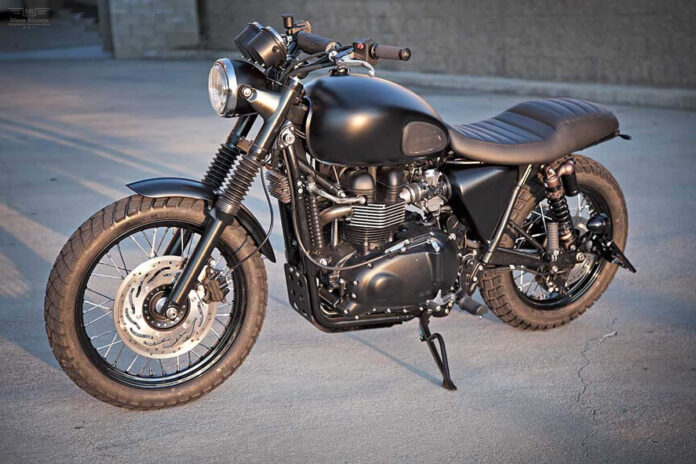 So we have been waiting for months to see what Roland Sands was going to do with Shaun Whites bike, and finally here it is ‘Shaun White’s Triumph’.

Shaun White in the snowboarding world is an absolute superstar but in the world of motorcycles he is a rookie and this Triumph Scrambler is his first bike. For that very reason he wanted to keep it simple and Shaun decided he wanted it black, which was done by a familiar name RSD favorite Chris Wood from Airtrix. The seat was replaced with a Triumph Thruxton version, the foam was also reshaped to lower the seat and was wrapped in a layer of fine leather. The front forks were lowered by Progressive Suspension and they also provided a custom made set of 970 Series rear reservoir shocks. An Arrow 2-into-1 high pipe was supplied by Triumph who also helped RSD remap the fuel injection system for the proper mixture. The bike also feature some modified parts from the RSD parts collection including the Tag Bracket, Tracker Grips and the Gas Cap.

Shaun White couldn’t walk down the street unnoticed and now he won’t be able to ride around town unnoticed either. It is hard to describe to non riders the feeling you get when you sit on your first bike, you never forget that moment. I’m sure Shaun won’t either and he wont ever forget his first bike a Roland Sands Design Custom!! Lucky guy!