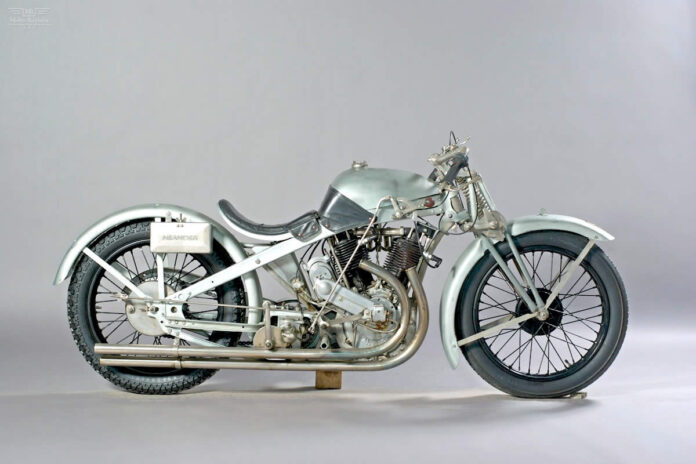 Neander was the creation of Ernst Neumann, born in Prussian city of Kassel. A natural inventor, Neumann built prototype tricycles powered by steam and internal combustion engines before embarking on a career as a commercial artist in Munich and then Paris, where he designed his first motorcycle for the Griffon company.

Returning to Germany, Neumann adopted the nomme de plume ‘Neander’, styling motorcars in Berlin before a career as a motorcycle manufacturer in the early 1920s. Neander motorcycles featured pressed steel frames; cadmium plated and was powered by a variety of proprietary engines from the likes of Villiers, JAP, Küchen and MAG, ranging in capacity from 122 to 996cc.   Later the design was licensed to Opel.

The end of 1920 was sadly affected with Economic downturn, like many others Neander Motorfahrzeug GmbH suffered. After losing the business, Ernst Neumann returned to the motor industry where he designed small, lightweight cars powered by motorcycle engines. The arrival of the Volkswagen having rendered such vehicles unviable, Neumann returned to painting in his final years, dying in 1954 aged 83. You can see his life’s work in the permanent Neander exhibition in the Euskerchen city museum and there is also an annual memorial ride in Bad Münstereifel.

Todays featured 1929 Neander P3 1 was one of the last motorcycles to leave the factory before it’s closure. As rare as hens teeth this Mag-Powered Neander V-Twin was purchased by Professor Ehn circa 1964 from a fur trader in Vienna. The Neander was carefully restored at the Professor’s workshop by a curator at the Vienna Museum of Technology. The bike was auctioned at Bonhams with a final sale price of £31,050.

To us Ernst Neumann was a time traveler, who went far in the future to create something remarkable like this; the structure, the design and details of this bike will leave you wondering around it in circles. Ernst Neumann has left his mark in the motorcycle history book by inventing his creation ‘Neander’, an inspiration for the young generation.