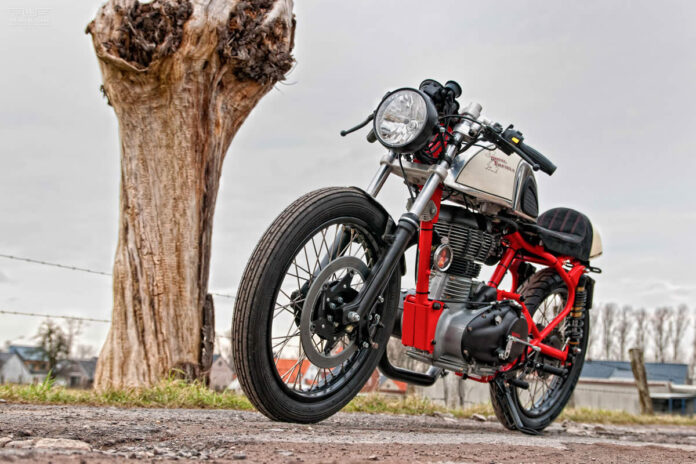 Yves, now 39 was bitten by a motorcycle bug when he was teenager. Everything he does has more or less something to do with motorcycles and the culture around them. In 2005 Yves started his own company ‘T-Factor Bikes’ located near Ghent, 30km from Brussels. With humble beginnings the company is now a full professional and all around motorcycle store. Yves is joined by his 2 helping hands Filip, who has 20 years of Honda experience and Mathias, the young blood in the company who has also been bitten by the motorcycle bug.

T-Factor Bikes specializes in Royal Enfield, Norton and Benelli. They sell and maintain bikes but what they are most passionate about is customizing and rebuilding bikes at the demand of their customers. All three contribute to the projects and the end result represents a little piece of each of them. Yves tells us “The love for Royal Enfield started about a year and a half ago. We became interested in the brand, and since the first time we rode one we were sold and completely into Enfield”.

Whilst they were busy on another bike project they came up with the idea to build a Royal Enfield Café Racer. They had the idea and they have done it, introducing their Royal Enfield Cafe Racer. Yves runs us through the build process… “We started with a new Bullet Electra 500EFI, which we demounted and we took the frame as the base of the racer. This is completely cleaned from all its unnecessary parts and painted in red. The wheels, front shocks, custom made exhaust and engine carters were painted in black and the rebuilding of the bike could begin. We CNC and adjusted a Beringer front brake disc and caliper instead of the original Enfield front brake. Together with an iron front brake line and the original brake pump the Enfield would have much more braking power.

We mounted the front fork with a custom made yokes and front fork top bridge. Between these two are the clip-ons and headlight located completely in café racer style. A front mudguard was modified and together with our custom-made speedometer table the front of the bike was complete. As for the fuel tank we picked an alloy type made for Royal Enfield, where we adjusted a seat on. This is modified on the frame and completely custom made, including the cushion. The seat also stores a lightweight battery and the power commander, which gives the bike more power.

At the back are the custom-made rear shocks from Hyperpro. These are exclusive for this bike and completely adjustable.

The heart of the bike, the 500cc engine is on the outside modified with black carters and red painted Royal Enfield logos. At the inside, the engine is changed with a ported head. This is positive for the airflow and together with the commander the bike now has 38Hp on the bench instead of 32Hp before the upgrade.  On the injection we mounted a K&N air filter, because of the weight and the old school look.

To complete the look of the bike we mounted the front mudguard and a fuel tank with back-step kit and airbrush the seat. Having the bike finished in the way we wanted makes us very satisfied. The Royal Enfield Cafe Racer was a nice creative project, it’s a fantastic bike to work with and we are looking forward to building our next one!”