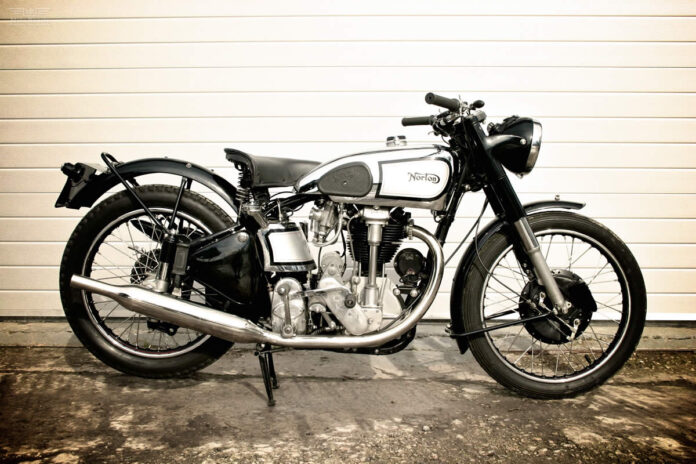 Norton Motorcycles is an iconic British motorcycle manufacturer, dating back as far as 1898. Founded by James Lansdowne Norton of Birmingham, the company first started as a manufacturer of fittings and parts for the two-wheel industry.

In 1902 Norton started its first production of Norton Motorcycles known as the ‘Engerette‘, which were fitted with a single-cylinder 143cc Clement engine.

For today’s feature we have selected one of Norton’s most charismatic models named in motorcycling history “Norton International Model 30”. Norton first used International for its newly designed race bikes and also for the TT replica sport roadster in 1932

Overseen by Joe Craig, Arthur Carroll designed an overhead-camshaft engine for the Works racers for the preceding two years and although it retained the 79 × 100 mm bore and stroke of the Norton CS1 the Model 30 International was all new. Based on the Works bikes and intended for racing, the International could be ordered with refinements such as lights and a kickstart-equipped gearbox. In 1933, the forks and gearbox were redesigned and in 1935, the Sturmey-Archer gearbox was replaced. Sturmey-Archer had stopped making gearboxes and Norton purchased the rights to the design and commissioned Burman to produce them.

In pre-war days, the Norton Model 30 was the racing flagship of the range. Norton factory riders on Inters, including Jimmie Guthrie, Jimmy Simpson, Stanley Woods were household names of the racing era. In 1935 at the concrete bowl track in Montlhery, France Works Norton team rider Jimmie Guthrie set a number of world speed records on a Norton International.

At the outbreak of World War II the Production of the Model 30 and 40 International were halted temporarily. After the war International production resumed and Norton produced International Model 30 with an iron head and barrel, as fitted to the pre-war CS1 and CJ Norton’s. The suspension was upgraded to Norton Roadholder telescopic forks instead of girders and Clubmans versions were also produced without silencers and lights for racing use. Close ratios gearboxes were supplied as standard from 1947, and the alloy engine made a comeback in 1953 with a new version of the featherbed frame.

Without a doubt Norton International had a pedigree, which was borrowed from some of the most famous British racers, and performance that kept riders enchanted to this day.