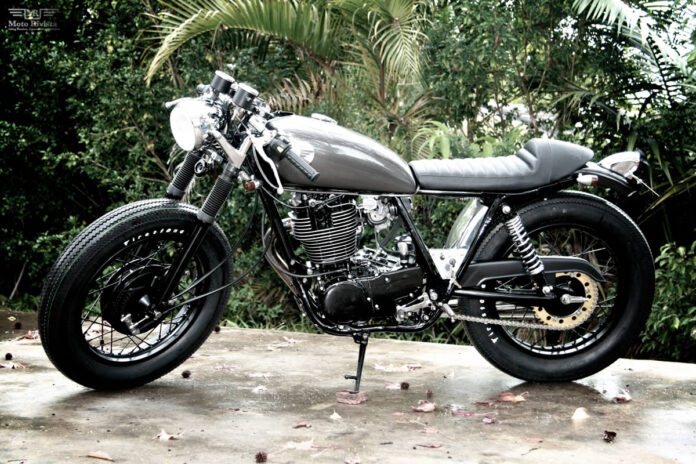 Today’s feature a custom Yamaha SR400 aka Varkain II comes from Coffs Harbour, a coastal city located on the north coast of New South Wales, with the most liveable climate in Australia.

The customer brief to Maurice was he wanted an instantly recognizable 50/60’s Bobber style. It should have major stealth appearance with very minor contrasting feature, low seat height and racer style seating position. And finally it must be built to conform to South Australian registration laws and LAMS approved.

According to Maurice Rissman “As the name suggests, this is the second Varkain we’ve built and although similar in appearance, the Raider pledge to build no two bikes identical is clearly obvious when both bikes are viewed together. After revisiting the original Varkain design brief we remembered what it was that so many people liked; it was simple, yet elegant. One of the hardest things to achieve when designing a truly ‘custom’ bike is to make it look un-customised on first glance, while at the same time being far more than a standard bike with custom paint job and aftermarket exhaust. With the first Varkain we had a clean sheet of paper, but with this build we had to achieve the same instant appeal in simplicity and appearance, but with the added difficulty of being a completely different bike. Of even greater concern was that the bike was being shipped interstate and we had to ensure it would comply with the owner’s local registration requirements.

After selecting the donor bike we gave it the usual engine and transmission checks, and when happy with the results stripped it to a bare frame. Everything not required on the frame was cut off and placed in a tub for weighing at the end of the build. We had a reasonably tight budget for this build which meant there was no spare cash to let us rip the engine apart and up the mumbo jumbo, so the alternative is to get the weight down to an absolute minimum so that what power we had on tap could be given every bit of help; in the end we removed more than 56kg’s!!

Another problem we’ve had to deal with over the years is how to make 30 year old switch-blocks look new again. A Raider Retro is referred to as a ‘re-manufactured’ bike; everything on the bike is either new or rebuilt as new, but with plastic switch-blocks that have endured decades of UV deterioration, about the only thing you can do is to paint them, and that just doesn’t work in our books. To overcome this we approached all of our custom parts suppliers for help, and one said they’d reproduce a generic set if we order sufficient quantity. Safe to say we now have enough new switch-blocks to supply a small country.

At this stage the bike was ready for paint, which means we pack the High Priest off to the paint shop where he fills his cauldron with all manner of concoction. After a few hours of silence the paint shop doors burst open and out through the foggy paint haze we see the finished colour; a fabulous blend of black and bling that maintains the customer’s stealthy brief, but still has a bit of razzmatazz tucked away for surprise in special light. The result gets a unanimous thumb’s up from Tom and I, so on with his Darth-Vader type breathing mask and the High Priest disappears back into the haze to paint the remaining items.

Unlike the Honda GB400/500 and our larger capacity builds, the SR400 is kick-start only and therefore we can get away with the smallest battery produced. This is a major advantage to designing where the Varkain’s electronics will reside, and as you can see in the pics, they don’t appear to be anywhere. Next are the guards; the rear is one of our own polished alloy designs, but acknowledging the owner’s desire for stealth meant that we painted the rearward section same as the tank, while leaving the lower splash guard area polished. The Varkain design excludes a front guard, but to ensure the bike passes it’s rego inspection we modified a standard SR400 guard that actually looks quite good and I wouldn’t be surprised if it remains in place. Getting the guard to fit over the whopping great 450 section vintage Firestone was quite an achievement, and I doubt it’ll be the last we see of that guard design.

At this stage the bike is effectively complete so it’s on with the freshly powder-coated wheels and fabulous vintage Firestone’s, then out into the sunlight for the first time to be admired and photographed in the Raider Retro Hall of Fame. With the photo session done it’s the first of several road trials we undertake to see what works and doesn’t work. It’s all very well to build a custom bike that looks great sitting on a bench, or on static display, but it’s another to create something by hand that has to be ridden daily, regardless of weather, and capable of getting from point A to point B in one piece. How many times have we all seen custom Harleys and alike being trailer-ed home, or off to the workshop to be repaired. Like all Raider Retro’s, this custom Yamaha SR400 Varkain II is fun to ride and turns heads. The effort invested in reducing weight is very noticeable when you twist the grip; it jumps away with ease and its lightness makes it feel like a pushbike (bicycle) to throw through turns”.

Special thanks to Maurice for giving us another detailed account of the work involved in his custom project!