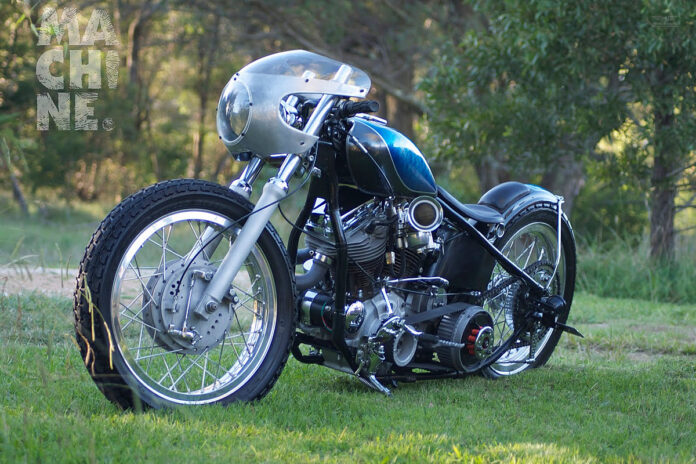 Australian Matt MACHINE , is a gifted motorbike builder based in New South Wales. Building motorbikes is not the only talent Matt has; he is also an established architect. Twenty years ago, he began to build and restore his first bikes.

From that point it took him twenty years to be able to set up his own workshop, with tools and enough room to start his dream. I guess it must be the passion that kept him going to reach the point where he started building amazing motorbikes. His workshops name “MACHINE” comes from the Jim Jarmusch movie “DEAD MAN” starring Johnny Depp. MACHINE 50 Panhead was the creation, which put him on the cover of Greasy Kulture Magazine. Matt built this bike for his friend Joe. The base for the 50 Panhead was a 1950 Harley Panhead, which Matt bought off eBay USA. The entire build took place at Matt’s workshop in New South Wales. The build started from the frame, which was full of cracks, it took Matt a good 40 hours to repair this.

Lets check out a brief history of the 1950 Panhead, which was a Harley-Davidson motorcycle engine, so nicknamed because of the distinct shape of the rocker covers. The engine is a two-cylinder, two-valve-per-cylinder, pushrod V-twin. The engine Matt began working with was in good condition. Matt only had to fit new valves, guides and hardened seat and repair one of the exhaust ports.

Matt was getting annoyed about how his right knee was hitting the carburetor on his 48, so he tried putting the carburetor on the left side of this 50 Panhead and pushing it forward. He couldn’t do it on the right side otherwise the inlet length would be too long. Matt started cutting, heating, bending and welded a standard S & S manifold and at the end he achieved a nice position for the carburetor. Now this is the part where motorbike builders will take a few exceptions to have a bit of pain with their riding position but not Matt MACHINE.

The tank on this 50 Panhead belongs to Kawasaki, the fender is from Yamaha. The front brake is a Kawasaki twin leading shoe unit. The front of the bike was taken from the Harley Sportster. The fairing was heavily modified aftermarket. In the interest of doing it properly Matt remade the exhaust in stainless steel. The mandrel bends he got were oval and not round which meant he had to hand beat each cut, put them in the vice and heat them, before he tacked them in order to get it right. Matt did the amazing paint job at his workshop. Beautiful leather work was done by Matt’s local saddler, natural stitching, and think leather. Matt is very particular with how he designs the pieces and he is even more particular with getting it exactly right.

At the end, what we have is the MACHINE 50 Panhead , which shows that Matt is a gifted Custom Motorbike builder on Australian shore.