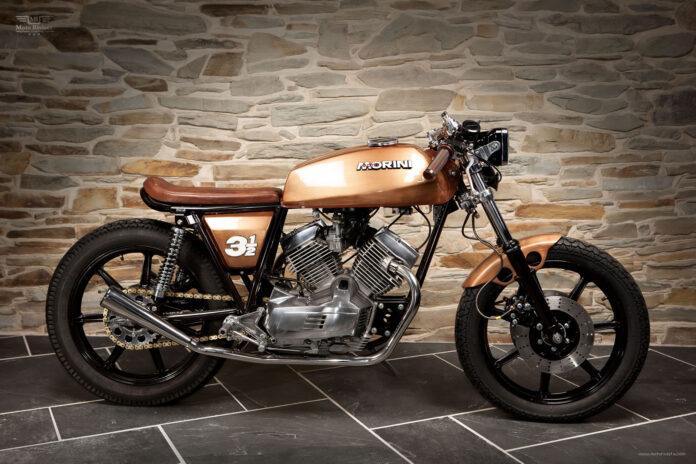 Hailing from North Cornwall, UK is the newly established workshop of Mark Robbins called Motoveloce. Custom Moto Morini’s have been few and far between on Moto Rivista, so of course we were excited when we saw this custom Italian Classic Moto Morini 350 aka Caffe Corretto.

This Moto Morini 350 is the first solo build from Motoveloce and Mark has been kind enough to share the story with us.

Over to you Mark “Even way back as a young kid I was messing around with bikes with my friends. As young teenagers we would pinch old Honda C50’s and Puch Maxi’s from our parent’s and uncle’s sheds and strip and customize them – great days! As I grew up and worked my way through all kinds of bikes I quickly gravitated towards anything Italian (My mother is Italian so there was of course a strong influence), Laverda in particular became my favorite, although I could never afford one until much later in life.

I served a toolmaking apprenticeship after school and then became involved with Jack Difazio building his Hub-Centre steering systems which was my baptism into serious bike building. Although my career choices took me away from bikes and engineering for a long time I started importing cars (Lancia and Maserati) and bikes from Italy as a hobby.

This continued up until a few years back when a chance meeting with an old friend coincided with a change in my personal circumstances resulting in me moving to Cornwall and teaming up with him building Triumph based Café Racers and Bobbers at Gilsons the Bikers.

However, the lure of Italian machinery and my desire to work exclusively with it meant I had to make the decision to set up on my own, so last year Motoveloce was born and the Morini you are featuring is my first solo build. I work on my own and bring in any necessary skills as and when I need them. I bought the Moto Morini 350 while still at Gilsons the Bikers, it sat there for 6 months while I just looked at it imagining how I wanted it to be. My brief was to remain faithful to the original design and attempt to create a Café Racer that looked like it was an ongoing project almost from the day it was new, using and improving as much of the original componentry as possible.

Then one day out came the angle grinder and I created the form I was trying to achieve by shortening the top sub-frame, relocating the electrics, removing the centre stand and as many of the fittings as possible to create a much cleaner and lighter look.

The donor bike was in fact a Strada with a Sport engine and twin disc upgrade, I machined the riser mounts off the top triple-clamp and created a housing for the Motogadget Mini digital readout that replaced the standard clocks. The riser holes were utilized for the custom warning lights that I made by drilling out button-head allen bolts and inserting colored LED’s into them. The old holes that were used to mount the original dash will have Motogadget push button fitted for the starter (when I can find one!) and to program the Motogadget Mini.

Once the frame was cleaned and de-tagged it was powder-coated Liquorice Brown along with the original wheels, forks, master cylinder, brake discs and calipers, battery box, splash guard, clip-on fixings and sundries. Upgraded electrics and a Motogadget M-Lock keyless ignition were fitted and the bike has been re-wired with a custom loom. The engine and gearbox was completely stripped down, the original black finish removed and the casings polished, all internals have been re-furbished and brand new bearings, seals and gaskets fitted. The side panels were cut and re-shaped, original front mudguard shortened into a sweet little stubby, replacement exhausts were fitted with custom built un-baffled megaphones.

The rear swing-arm bearings were replaced with roller needle bearings. I sourced a square headlamp in keeping with the sharp lines of the bike and maintaining the 70’s look and feel. The tank, side panels and front mudguard have been custom painted in a metallic brushed bronze effect.

The biggest challenge was a personal one – creating a genuine Café Racer while remaining true and respectful to the marque and not straying too far from my original concept”.

This custom Moto Morini 350 is the direct result of  Mark’s years of experience, everything on the build flows smoothly. I really like what Mark has done with this bike especially the retro styled paint job and quirky dashboard.