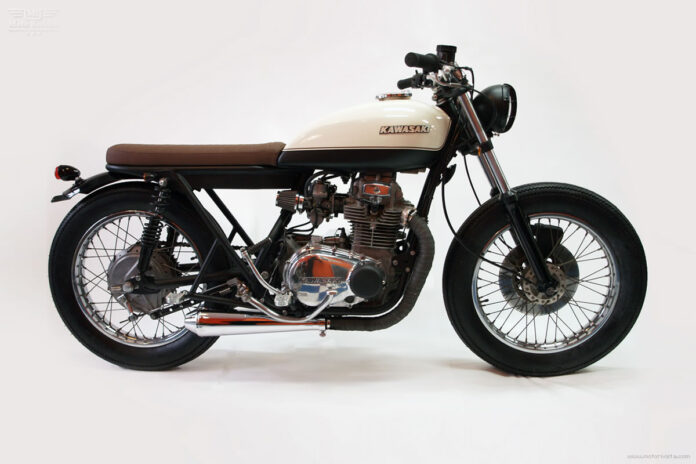 Here’s the latest a Kawasaki KZ400 from Spanish customizer Free Kustom Cycles; built with elegance this Cafe looking machine defines the mantra of less is more.

Marcos Vazquez is the owner and operator of  Free Kustom Cycles, which opened in 2003 as an accessories and clothing shop. By 2009 they had formed a garage where they built any kind of bikes, with HD or metric, and any kind of versions, choppers, bobbers or cafe racers.

The story began a few months ago when a customer took his Kawasaki KZ400 to Free Kustom Cycles to transform it into the bike he had always dreamed of riding. The brief was quite clear he wanted a bike with all its classical essence. Marcos started by dismantling the bike to sand all the pieces and then did a rough assembly to modify the parts as necessary ensuring it had the look the customer was after. The next step was to cut the rear sub-frame to do a new round rear sub-frame. The engine has had a facelift, the cylinder was cleaned and then all the covers polished. Marcos also cleaned the carburetors and a chrome conical competition air filter was installed.

All the electrical parts, including the battery are now under the seat in a small box, the key ignition switch and the start button are located under this box. This was the biggest challenge for Marcos because he had to simplify all the electrical wiring to put inside this box.

At the front this custom Kawasaki KZ400 features a new handlebar and Biltwell Kung-Fu grips. The original tires were changed to Firestone Deluxe and a new Goodridge front brake was installed. The other parts includes a speedometer with all the indicator and warning lights on a support, all made by Marcos. Regarding the exhaust pipes, Marcos adapted two-megaton baffles with exhaust wrap and made some new brackets to hold one on each side of the bike.

In addition to customizing any type of motorcycle, Free Kustom Cycles are the dealers in Spain of MOONEYES and more world famous brands, visit their website for more info.