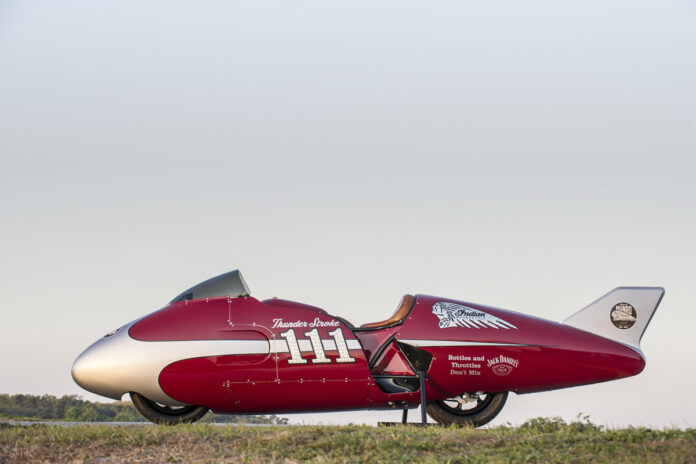 Fully custom-built, the Spirit of Munro is an all-metal tribute to the racers and mechanics throughout history who have collectively built the legacy of record-breaking racing performance and strength that is Indian Motorcycle. The streamliner was named in honor of Burt Munro’s, “Munro Special,” the historic 1920 Indian Scout that broke the under-1000cc land-speed record in 1967 at the Bonneville Salt Flats as famously portrayed in the motion picture “The World’s Fastest Indian.”

“We are a brand that will always strive to push the envelope in everything we do, so when the idea of building a streamliner to both showcase the new engine and pay homage to the racers, mechanics and engineers of the past landed on my desk, it was an easy decision,” says Vice President of Polaris Motorcycles, Steve Menneto. “We are proud to showcase America’s passion for Indian Motorcycle in such a unique and historic way.”

The streamliner was designed from the ground up to house the new Thunder Stroke 111 engine and showcases its awe-inspiring power and performance. The Spirit of Munro is not simply a display; it was built to run. A custom exhaust and intake system is mated with a chain drive conversion to allow for the tall gearing necessary for top speed runs. The all-aluminum bodywork was hand-formed using traditional tools and techniques. Wrapped around the modern Thunder Stroke 111 engine is a custom chassis capable of handling top speeds.

“Part of the process of building a new motorcycle is building many pre-production and production test engines,” said Gary Gray, Product Director for Indian Motorcycle. “The Indian Motorcycle engineering team is fully conscious that every day we are working with history and over the course of design and development many parts and complete engines are built, tested, disassembled and measured. We thought it a fitting tribute to place one of our pre-production engines in a one-of-a-kind vehicle to pay homage to the racers who have helped build the legend of the Indian Motorcycle brand over its 112-year history.”

Tapped to construct the Spirit of Munro was Jeb Scolman of Jeb’s Metal and Speed in Long Beach, California. Jeb’s extensive credentials building land speed racers, along with his hand-formed bodywork on a Stutz Blackhawk replica revealed him as the perfect builder for this tribute machine.

“When the guys from Indian Motorcycle called to ask if I would be willing to play a part in this historic endeavor, I could not say ‘yes’ fast enough,” said Jeb Scolman. “We built the Spirit of Munro in just three months of straight long work days. It was a brutal schedule, but to be a part of re-launching this brand and giving Indian Motorcycle fans a historic new piece of Americana makes it all worth the effort.”

The bodywork was sculpted to reflect seminal machines from history, as well as creating a unique package for rider and mechanicals. Using aircraft inspired and traditional custom techniques, the Spirit of Munro is a striking tribute to the past, and an irrepressible inspiration for the future of America’s first motorcycle company. Adorning the tail fin of the machine is the logo of another iconic American brand, Jack Daniel’s Whiskey who is helping sponsor the motorcycle through their “Bottles and Throttles Don’t Mix” responsibility campaign.

Indian Motorcycle and Jack Daniel’s are brands that are forever sewn into the fabric of American history. Both brands stand proudly to represent the best at what they do. “When the team at Indian Motorcycle shared their plans to build the Spirit of Munro we knew we had to be part of that project,” says David Stang, AVP Events/Sponsorships for Jack Daniel’s Whiskey. “We proudly promote the responsible enjoyment of our products, and a serious environment such as land speed racing shows what can be achieved when individuals strive for perfection. When the racing is done, we will toast our heroes of the past and the future.”

The Spirit of Munro will be on display at the Daytona International Speedway every day of Daytona Bike Week, and will take part in the Indian Motorcycle Spring Dash lap of the Daytona 200 on March 16, 2013.