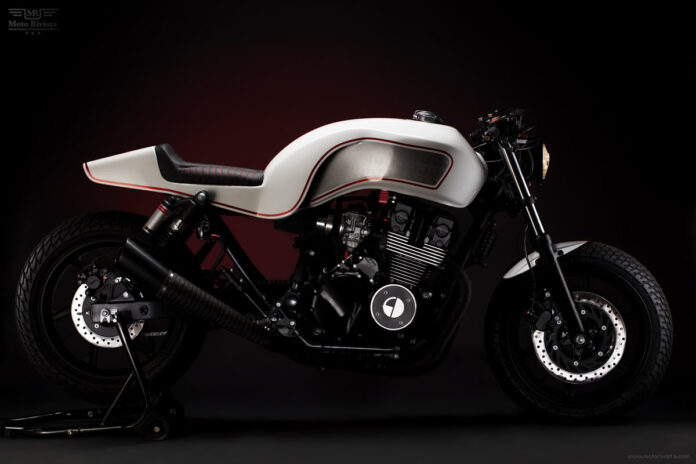 The world custom scene is growing at an exceptional rate, with lots of interesting custom crafts coming form Europe. Today’s feature comes from Portugal, a custom Honda CB750 built by it roCkS!bikes.

Portugal is one of my choice destinations for various reasons and one of them is riding motorcycles. Portugal is rich with its beautiful monuments and unique culture, lets not forget the delicious pastries and of course football! According to “Osvaldo Coutinho & Alexandre Santos “We are just two guys from Oporto, Portugal, both Engineers and addicted to motorcycles, sharing our creations with the world!

All we want is to pick up some basic motorcycle models, explore their limits and get them to next level in the cafe racer scene. We ride a BMW F800R and a Triumph Thruxton 900, but we have our own concept and ideas of design. No influences! We just have the need to build something different and provocative. What if someone wants to buy our motorcycles? Perfect, if not, whatever, let’s just ride them!

The “Gravedigger” was built from a 1992 Honda CB750 (seven fifty). It was a lucky catch, we found it at a local dealer and in perfect condition. All the parts of the bike were disassembled and the weight was reduced to the minimum. The rear end section of the frame was cut and shortened. The rear end shocks and the fork were lowered and stiffened, for better handling.

The engine was in very good shape, however it was rebuilt and painted in matte black. The gas tank, seat and rear section of the bike are one single metal piece that can be lifted for good access to the gel battery, fuse box and other electrical parts.  In the end it rides perfectly, right as we wished for a true cafe racer. It feels like we are riding a seventies race bike. You just can’t ignore the tremendous sound of the engine! This bike in particular was built to sell, but initially it was just a built for us to ride.

Soon this custom Honda CB750 will be available for sale, just like all the other ones that we intend to build, but we also do commissioned motorcycles”.