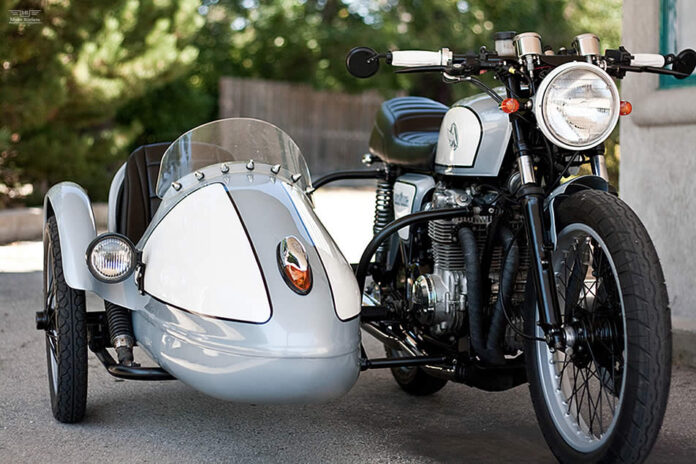 It is often the case when we are researching motorbikes for this site we find several we have to feature from the same builder. Just the other day we featured the 1978 Honda CB750 from Analog Motorcycles and today we are looking at another from their portfolio and our very first Sidecar Motorcycle feature the Honda CB 550. The Sidecar first appeared in a cartoon by George Moore in the January 7, 1903, issue of British newspaper Motor Cycling. Three weeks later, a provisional patent was granted to Mr. W. J. Graham of Graham Brothers, Enfield, Middlesex. Sidecars have been manufactured since early in the twentieth century. Until the 1950s sidecars were quite popular, providing a cheap alternative to passenger cars; they have also been used by armed forces, police and the UK’s AA and RAC motoring organisations. During WWII, German troops used many BMW and Zündapp sidecar motorcycles.

For the build of this Honda CB 550 K with Sidecar, Analog Motorcycles picked up the bike with sidecar at the end of June 2009 in Michigan. Tony used this bike to take his family for ride before he began the restoration. The engine on this Honda was strong and didn’t need much attention. The engine, frame and some of the other parts were powdercoated, the big parts were powdercoated by J & J powder coating. The carburetor got some fresh parts; the valves and the new clutches were adjusted. The original 4 into 4 stock exhausts were rusted from the bottom so they got replaced with new 4 into 1. The Sidecar on this Honda CB550 is a ‘Spirit of America’ from the mid 70’s. The Sidecar is made out of fiberglass meaning it is very light, Tony had to fill it with sandbags for balance and later decided to permanently fix this by welding an 80lb piece of iron to the frame.

Giving the Honda CB550 a super classic look is the painting of the bike, light gray and white with a black pinstripe.