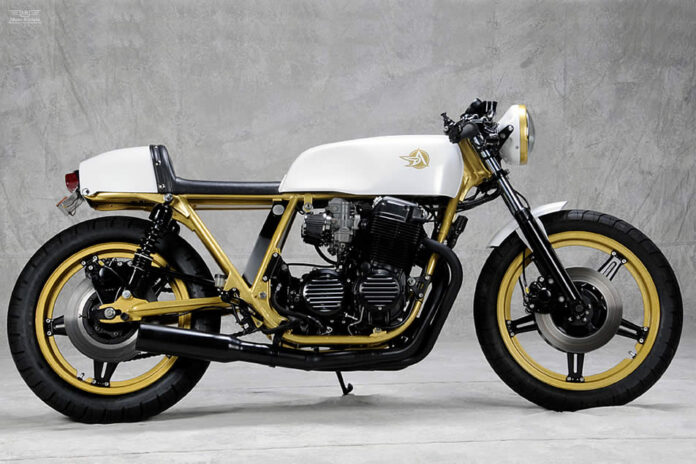 Analog Motorcycles came into existence in 2009 and was founded by Tony Prust, who has been riding and customizing motorcycles for 15 years. Analog Motorcycle’s has built a few amazing motorbikes that both look great and perform well.

1978 Honda CB750 supersport Café Racer is what we are featuring today. In 2007 Tony picked up this 1978 Honda CB750 Supersport in Milwaukee, WI. It was a rolling chassis with the mounted engine and the rest of the parts were in the box. For Tony who had never put any vintage bike together before, this was not an easy job. The bike was missing a few parts, which were discovered later. With some help from his friend Chuck D the bike was assembled with a little oil and some crazy wiring and eventually the bike fired up. Now Tony had a running CB750 with a plan to transform it into a Café Racer. To kick-start the project Tony ordered a few parts and started looking online to get some inspiration. He was a big fan of CB350’s and CB550’s and in particular the open area under the seat.

This project was Tony’s first full frame up build; the entire frame was heavily modified. Tony’s buddy Dominic fabricated the oil tank and most of the custom parts on this CB750. The tank sits between the front frames rails and works perfectly holding up to 3-1/2 in it. Front master cylinder of a 2003 GSXR 750, Ducati Monster S2R rear master cylinder, that is Tony’s favorite custom feature on this Café Racer. CB750 also has a perfectly fitted Vortex clip ons, rear set parts and custom rear brake set up. A hidden battery and all electric components and an aftermarket seat pan with custom seat work.

To paint this CB750 Tony had a clear idea in his head, He asked his friend Kiel from crown-autobody.com to paint this bike to match the color of his Fulmer gold metallic helmet. Later the bike was painted with Black, white and gold applied on wheels, pipes, breaks and the tank.

With the support of family and friends Tony was able to make this Café Racer what it is today. It has also won Rockerbox in Milwaukee, Best Japanese Modified 2009.