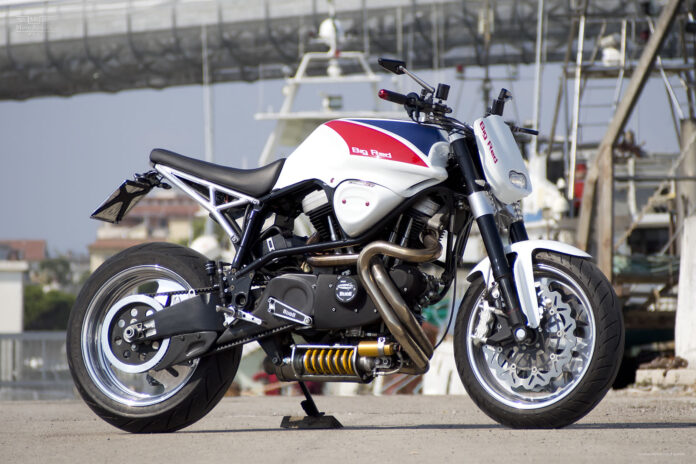 I am thankful to Filippo Barbacane of Officine RossoPuro for showing me the bespoke side of Buell Motorcycles; his Custom Buell 1200 X1 aka Big Red is the testament to Buell motorcycles performance and endurance.

It’s disheartening what happened to Buell Motorcycles, their 26 years of performance motorcycle manufacturing came to an end on October 30, 2009. They introduced many industry firsts like dedicated mass centralization, GTL brakes, underslung mufflers and fuel in the frame. This custom Buell 1200 X1 was built for a client Michele Buccelli who is also a friend of Filippo Barbacane. The idea for the build was to craft something special without spoiling the aesthetic impact of the Buell 1200 X1.

According to Filippo “Michele is a special person, he had entrusted me with his bike without any problems, giving me total freedom to customize his bike.” I believe in never telling an Artist how to paint my picture, if Filippo is modifying your bike, your custom project is in safe hands!

The transformation from the stock Buell 1200 X1 to the Big Red took 6 months. All the parts on this custom Buell 1200 X1 are home made, which is a specialty of each of Filippo’s custom crafts. The frame is the original while the rear subframe in aluminum and was produced by Officine Rossopuro. Other modifications include plates, tank cover, fender, saddle, the tail, the holder and the fairing, all of which are made with CNC machines. This Custom Buell 1200 X1 rolls on 17-inch cast aluminium wheels and features new, hub-mounted rotors. At the front the bike features a Marzocchi Rac 50 fork, and an astounding Ohlins rear shock fitted underneath the bike. The engine didn’t receive any modifications other than an oil cooler from Technorati. It was fitted with racing pipes and a silencer placed next to the Ohlins shock, under the bike.

The body parts have been crafted in fiberglass and have been painted classic racing glittering white, red and blue.

While we may never see any new Buell motorcycles coming out of the production line, the legacy of Buell Motorcycles will remain in the hearts of it’s riders and enthusiasts. Hopefully this is just the first of many custom Buell Motorcycles we will see on Moto Rivista. We think Officine RossoPuro’s Big Red is a real winner, do you?