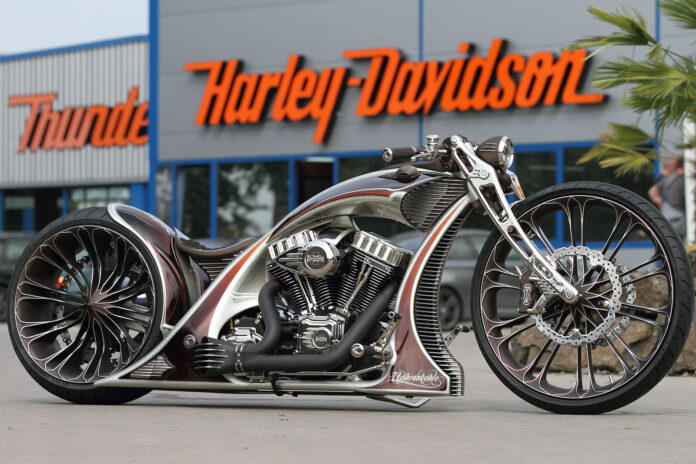 Approximately 75,000 Harley riders found their way to the event, which is the largest meeting all over Europe.

In the Harley-Davidson Ride-In Show, the Unbreakable was elected to “Best Custom” & “Best in Show”, but also in the Arneitz Customshow Thunderbike Customs was able to prevail against tough competitors in the highest “Championship Class”.

Furthermore the bike Thunderbike “Nickel Rocker”, a Harley-Davidson Softail Rocker C, won the cup for a 2nd place in the “Modified Harley Class” – so overall it was an enjoyable weekend for the team, located in Hamminkeln next to the Dutch border.

After a construction period of about six months, Thunderbike president Andreas Bergerforth is overjoyed that he was able to finish his new bike just in time for the European Bike Week.

It was a world premiere for Thunderbike Customs: For the first time a 26-inch front wheel was installed in a handmade frame and a completely new frontend, so they had to pay special attention to the suspension & frontend geometry. Especially because there was only one try to finish each part, or the presentation in Faak would have been impossible.

The noble painting by Ingo Kruse and a Nickel-plating of many parts took once more a lot of time, so the schedule ended up with a few days to assemble the bike and send it well lashed on the journey to Faak.

The Germany premiere of the Unbreakable will be held this saturday (09/14/13) at the Thunderbike Open House in Hamminkeln.