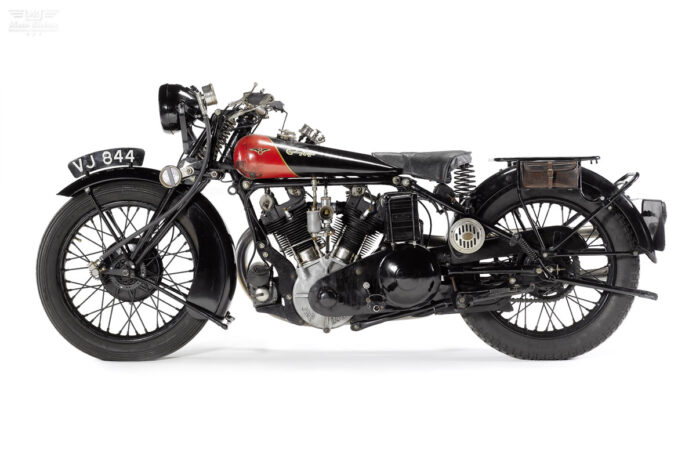 Coventry-Eagle was a British motorcycle manufacturer, first established as a Victorian bicycle maker under the name of Hotchkiss, Mayo & Meek.The company name was changed to Coventry-Eagle in 1897.

Coventry-Eagle built a diverse range of motorcycles until the outbreak of the Second World War. The motorcycles were hand built from components and finished carefully, the Coventry-Eagle motorcycle range included Villiers Engineering and JAP engines. The Flying-8 was the most famous of Coventry-Eagles motorcycles and with a guaranteed top speed of 80mph was a worthy rival for the Brough Superior and Brooklands racing machine. The Flying 8 had a round and tapered fuel tank, and bore a striking resemblance to the Brough Superior of the same period. When equipped with a Jardine gearbox the Coventry-Eagle Flying-8 OHV didn’t come cheap and was also the second most expensive motorcycle on the market at the time.

By 1928 the Flying-8 was equipped with magdyno electric lighting, Ghost silencers, and a steering damper, and this version was considered to be “one of the most handsome British bikes on the market”.

To this day not many of the overhead-valve Flying-8s are known to have survived worldwide. When the world economy crashed in the 1930s, Coventry-Eagle was forced to change tactic and they concentrated on the two stroke “bread and butter” lightweights. The last OHV Flying 8 left the factory in 1930 and the final side valve model the following year.

In 2011 this Coventry-Eagle Flying-8 OHV fetched an impressive $265,500 USD inc. premium when auctioned by Bonhams.