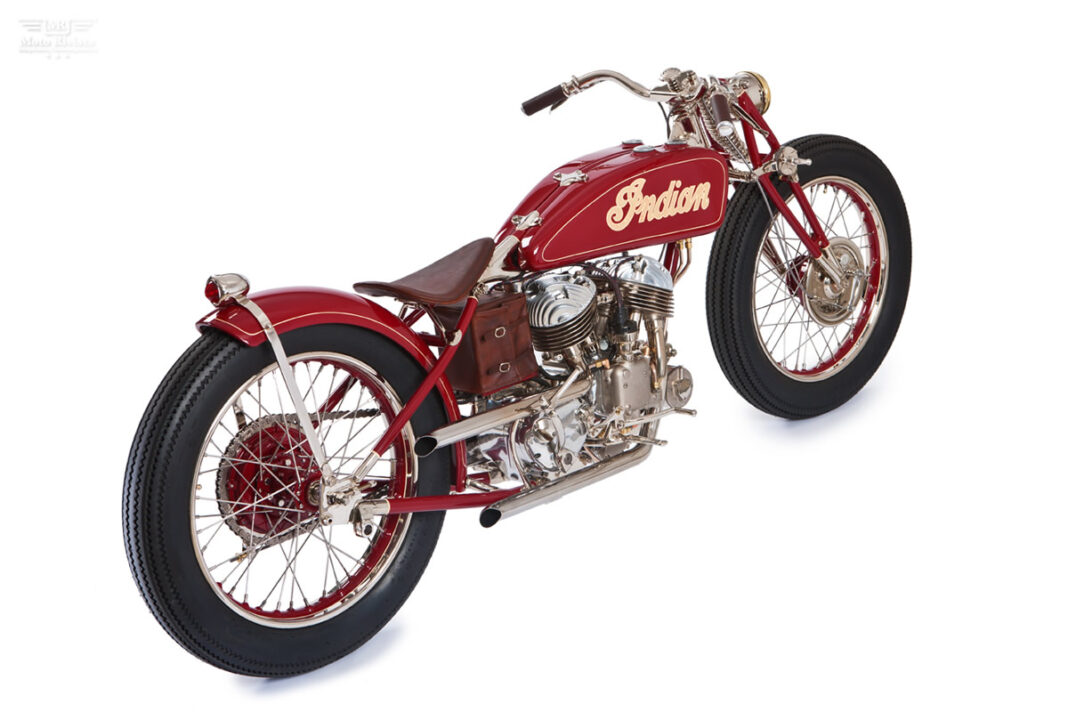 Today’s feature is a blast from the past a custom Indian built by master builder Jesse Bassett at The GasBox. Jesse Bassett first appeared on Moto Rivista with his flawless creation The BSA Lightning.

It’s ironic that when we are young we like the future and as we get old we look back in time and enjoy certain memories of it. I always get excited when I get to feature a custom vintage bike. In many ways vintage bikes remind me of my past, and when I saw Jesse Bassett’s custom Indian it reminded me of the time I spent with my dad working on his vintage bikes.

Lets get a little flashback about Indian Motorcycles “Hitting the road in 1901, Indian was not only the first American motorcycle, it was the world’s best-selling bike and, having introduced the first V-twin motorcycle to the world in 1907, the most technologically advanced. The Indian Scout was built from 1920 to 1949 and was designed by Charles B. Franklin.”

Back to Jesse Bassett’s custom Indian “The motorcycle started out as a 1940 741 Indian Military Scout. The design concept was to make it look like the styling of the late 1920’s Scouts. First the top frame rail was cut and raised to frame the shape of the fuel tanks. The frame was then stretched 4” to move the down tube in front of the generator instead of behind it, by doing this the line of the motorcycle is cleaned up by not having a generator sticking out. The stance was next, the lower girder links were stretched 3/4 of an inch for rake and the front axle position was raised 3 inches for the correct ground height in order to accommodate both front and rear 19” wheels. The top of the girder was narrowed 2” to eliminate the bulky look.

The fuel tanks were hand formed from sheets of .080” aluminum to copy the look of the 1920’s Indian tanks. The handlebars were made from cutting up sets of Harley Panhead bars to utilize original internals and designed after original Indian Scout bars. The front hub is original Indian and the rear is Triumph. The rims are Dunlop’s. The headlamp is a 1920’s automotive lamp and the bezel was hand spun from brass to copy the original since it was in too bad of condition to reuse.

For the drive train, the Indian engine was rebuilt with new hard parts and a Norton Commando 4-speed transmission was chosen in exchange for the oem Indian 3 speed. New engine plates were made and the Scout primary was cut in half, offset and mated with a 1920’s Indian outer primary. All of this was done in order to accommodate the Norton diaphragm clutch. The Norton engine sprocket was bored out and welded to the machined down Indian front sprocket, then re-hardened.

All aluminum was polished, all steel was nickle plated, and all cast iron was electroless plated. The entire frame and fork were nickle plated then painted Indian red.

It’s not surprising this custom Indian beauty come second in the Custom Class at this years Quail Motorcycle Gathering behind Shinya Kimura’s Mv Agusta. The flawless creations that roll out of The GasBox will be admired for many years to come.

Check out the other featured bikes from The GasBox.