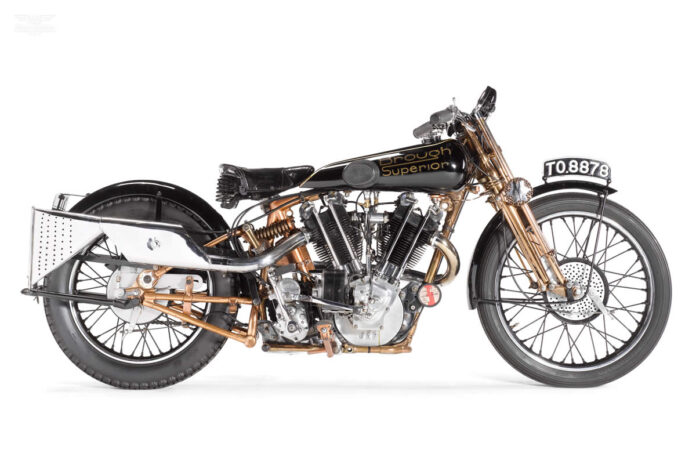 A blast from the past, a motorcycle from the 1920s is something we would do almost anything for! This bike is as rare as hens teeth, so you would expect the auction battle for this bike to be a historical event.

Bonhams Motorcycles are returning to the International Motorcycle Show in Staffordshire on the 16th of October 2011. The auction will be held in conjunction with the world famous Classic Motorcycle Mechanics Show. One motorcycle in particular, the 1929 Brough Superior SS100 aka Moby Dick will be the highlight of this Auction; the pre-sale estimation on this bike is £240,000 – 280,000. Moby Dick was tested by Motor Cycling magazine in 1931 and achieved a top speed of 106mph, a surprising achievement back in those days when very few road vehicles of any type were capable of achieving three-figure speeds. Later with a few modifications and tuning to the 1,142cc V-twin engine ‘Moby Dick’ increased the figure to 115mph in top (third) gear. The bike was sold and then repurchased by the vendor’s family, Moby Dick was restored in 1998 and since then been the center of attention where ever it appears.

“The second Bonhams Stafford sale of 2011 will offer one of our most eclectic selection of significant collectors’ motorcycles ever, with everything from one of the earliest Brough Superior SS80s to a concours condition Kawasaki Z1, and aims to build on the incredible success of our April auction and its £2 million result. With in excess of 200 machines we aim to have something for everyone.”