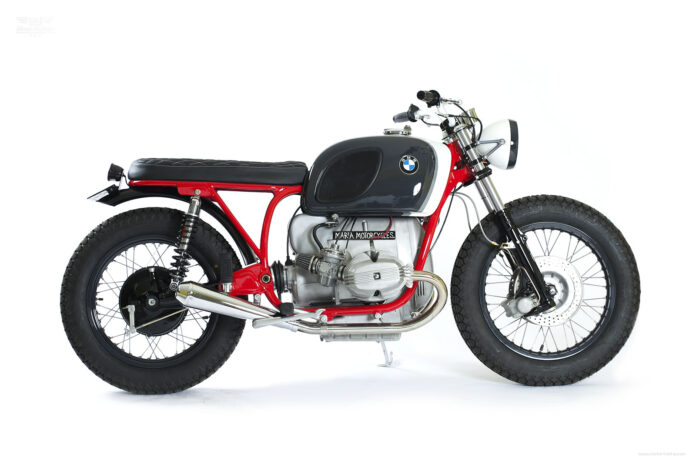 The passion and obsession with the machine strapped on two wheels is eternal for many motorcycle riders. There is nothing quite like the feeling you get riding a motorcycle, you feel rejuvenated and inspired.

Today’s feature build BMW R75/6 PANZER by Maria Riding Company captures the desire to own a machine which resembles a riders characteristics and personality. This project started out as a customer request for a seat for a BMW R75/6. Soon it turned into a complete and very ambitious custom project.

According to Maria Riding Company “Our client already had an engine and a few other parts rebuilt, but the overall concept of the bike was still missing. We decided to accept the challenge, and re-think it all over.”

Though Maria Riding Company has had great success with building custom motorcycles based on Yamaha, Ducati, Kawasaki and Triumph. The PANZER was their first BMW R75/6 project. In the beginning Maria Riding Company was a bit skeptic due to the bike having a few technical limitations.

“Based on the bike our idea for this build was it should be smaller and lower than the original. We also wanted the wheels to become more present in the overall look of the bike. To accomplish this we had to change the dimension of the tires and install new aluminium rims, which can fit the Firestone AMS tires. We had to push all the rims of the back wheel to the left, because this bike has a transmission shaft and the new large tire was not able to fit.

The sub-frame of the BMW R75/6 was completely rebuilt and welded with a larger tube diameter, to guarantee strength, and to give the frame a more uniform and robust look. All suspensions were modified and shortened, because we wanted the bike to be not as tall as the original. We put a pair of Bitubo´s on the back that were really shrunken!

Since we had changed the suspensions, the original horizontal structure of the bike was changed too including the fuel tank. This allowed the bike to be in a more balanced position on the overall bike appearance.

In this build there were many small details that we loved. For example the original air box was completely changed to fit the battery. We had to close the original air entrances with welded aluminium plates, then we had to blast them to remove any marks and to keep them with the original look. With this we solved two problems, one was to hide the battery, and the other was to fill the gap on the back of the engine.

All the electrics on this custom BMW R75/6 were simplified. We put the starter on the key switch, and the controls are the simplest that we could find. It also has a smaller speedometer and tachometer.

The overall look of the bike became very simple and clean. It was interesting to design a mix of classic with something more aggressive. The red of the frame was risky but with the overall black and steel we thought the final result turned out really great. People who know our work are aware we love to take risks with different color approaches.

The name is Panzer. A German machine that is classic and robust and that is not going to be indifferent to anyone!”