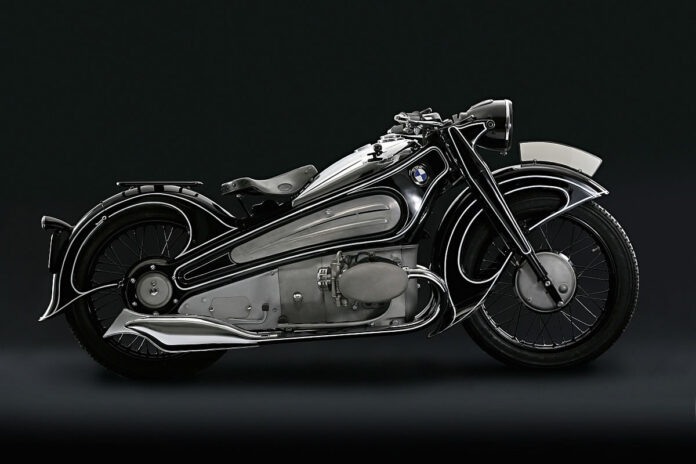 Issue #3 of BMW Motorcycle Magazine . The Art Deco Treasure, BMW R7 Streamliner, was sealed in a box for over 70 years. This bike is actually a prototype that was built by designer Alfred Böning who wanted a different kind of motorcycle.

Still in the 1930’s many motorcycles were “bicycles with motors”. Böning wanted an aerodynamic (love that streamlining!) bike with a pressed steel frame, enclosed bodywork, and a new-back-then telescopic front fork system.

The R7 was originally built in 1934 as a prototype, and production plans were scrapped as World War II spread across Europe. The R7, which was more heavy and expensive to build than BMW would have liked, was stripped of some useful parts and put away in a box.

In 2005, the R7 was brought back into daylight, and BMW Classic rebuilt the bike, which has suffered corrosion over the years. Now the bike, which many consider a masterpiece ahead of its time, is operational again.

The 1934 R7 prototype is an unquestioned design success – a graceful and beautiful study of flowing lines, curves, and feminine masses. Almost to a person, especially to non-motorcyclists, it is considered one of the most beautiful motorcycles ever made. As good as it is, the R7 is a total philosophical departure from what is best about BMW during its first 60 years; restraint. The extravagance expressed by the R7 is shockingly French – more Delahaye than Bauhaus. That the R7 was never serially produced makes complete sense, but 75 years on, she’s still a heart-breaker.