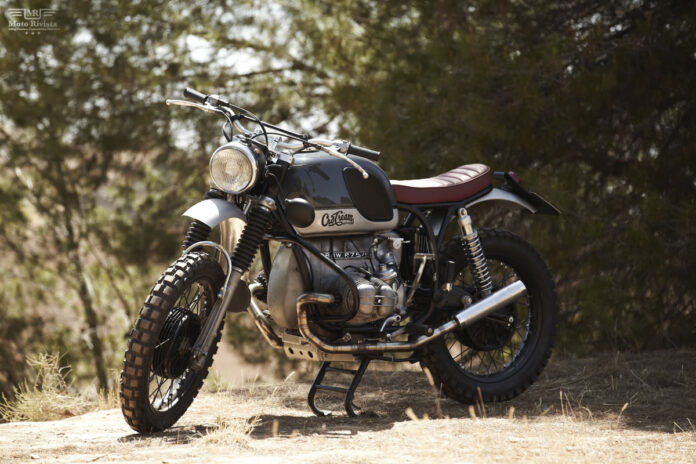 It doesn’t take too much effort to start liking Vintage BMW Motorcycles, the aesthetic of its remarkable engine and it’s pinnacle engineering have been the force behind it’s popularity.

The attempt of taking a Vintage BMW motorcycle and transforming it into something a bit more desirable can be pretty daunting. How do you like something, which you thought was already perfect in a first place?

Today’s feature holds the answer to that question. Lets take a look at Café Racers Dreams scrambler style creation “The Challenge”, an innovating design approach based on a 1971 BMW R-series .

According to Pedro García “The Challenge has been our first attempt on a BMW Motorcycle. For us it was a pretty big challenge because I never particularly liked it, and I had never seen a preparation on this basis that had captivated me. A build project without an owner is no hassle; you get the freedom to choose the design, colors and the components. Thanks to Jose for sponsoring the build”. Pedro’s quest to build his love for the BMW Motorcycle took him 6 months. Since the bike had no owner there was no rush to finish the build. To begin with the build the stock engine was dismounted to work on, since it was Pedro’s first custom BMW attempt he had some help from local BMW specialist Javier de Maxboxer. The engine was overhauled and was assembled with Bing CV carburetors and a K&N air filter. The exhaust was designed by Cafe Racer Dreams and was built by GR.

A new rear frame was created to adapt the new seat; other fabrication work includes the front and rear fenders. At the front this custom twin cylinder boxer features a Renthal Streetfighter handlebar, the fronts suspension was rebuilt with new springs and oil. The new Nitro Shock absorbers by Hagon and more tilting make the bike more agile and have a more modern aesthetic touch.

The bike also features a new electrical system, ignition system and Tarozzi foot pegs. The finished bike rolls on Continental TKC 80 front and rear tires, perfect to get off the roads and into the wild! The beautiful color scheme for this build was designed by Cafe Racer Dreams and painted by Ufo Garage.

According to Pedro García “I can say that the design of this bike is what’s inside my head at this time. Nobody told me what I should do. Subtle changes, but also radicals have made it one of my favorites in the history of our brand.”

Just to let you know Pedro, this bike is also one of our favorite builds in your custom portfolio. The gateway to the custom BMW motorcycle is now open, commission Cafe Racer Dreams to get your own flavored custom BMW!