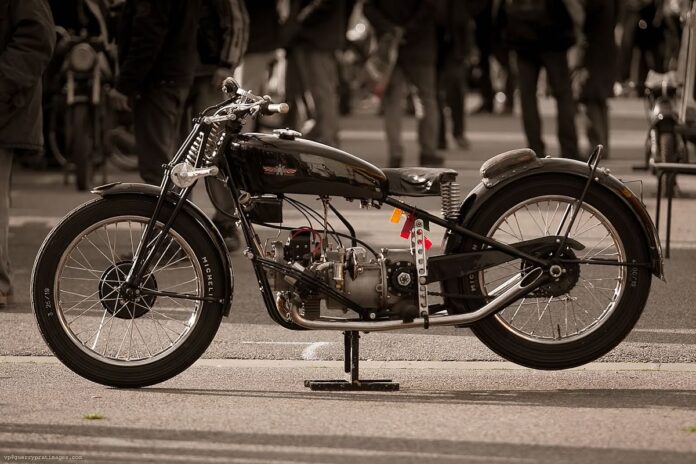 French manufacturer Gnome et Rhone also produced an improved 493 cc version of this vintage motorcycle under license until 1925.Between 1920 and 1924 they produced over 3,000 of the ‘French’ ABC but relatively few have survived. This machine was born in 1922 in the creative brain of a pilot: Barthelemy, official shop keeper in Paris of the English brand ABC: “All British engineering Co”, company created by engineer Granville Bradshaw and manufactured by the english plane maker Sopwith.

This was the departing point of the engine tuning of Barthelemy. Capacity increases to 500cc, the engine is equipped with a magneto and two carburetors. Timing and the rockers system are changed. Barthelemy added an oil radiator and oil filter, for the engine had a tendency to overheat, which gave it the nickname ” glow worm ” for, at night it happened that the cylinders turned to red…

The engine was initially equipped with an electric starter and an air compressor which Barthelemy took off in order to lower the weight.

The present owner found this mix in a junk shop and retraced its history and after 4 years of restoration made it look like Barthelemy’s realisation.