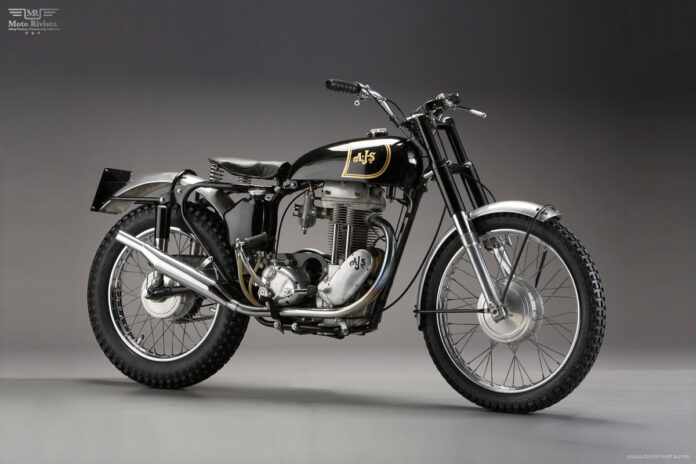 The classic era of British motorcycles has produced some of the most enchanting motorcycles out there. The AJS 16MC 350 is one of those timeless British classic motorcycles.

Their well-proven success in war service kept the AJS 16M 350 cc singles in production. The AJS 16M 350 was wrapped in a rigid frame with Teledraulic front fork. The jaggedly built overhead-valve engine was assembled with a four-speed gearbox.

Associated Motorcycles also produced an almost identical motorcycle under the Matchless name, the Matchless G3L. In both bikes there was only one difference, the Matchless carried a magneto at the rear of the cylinder barrel, while the AJS magneto was at the front. These bikes were also sold to a large number in the civilian market. The simplicity and the practicality of the bike made it minimal to maintain and very economical for civilian use.

The rough and reliable AJS 16M was ideal for the popular sport of motorcycle trials. The AJS 16M gained a C (for competition) designation, modifications included upgrading the frame to a welded duplex tubular frame with an engine cradle to reduce weight and redesigned exhaust and footrests to improve ground clearance.

The one you see above in the picture is the 1957 AJS 16MC 350 and features a short wheelbase with the new swinging-arm frame.

In the post war years Hugh Viney lead the AJS works team and won the challenging 1947 Scottish Six Days Trial on an AJS 16MC at his first attempt. Later in 1949 he repeated the achievement and made it three in a row.