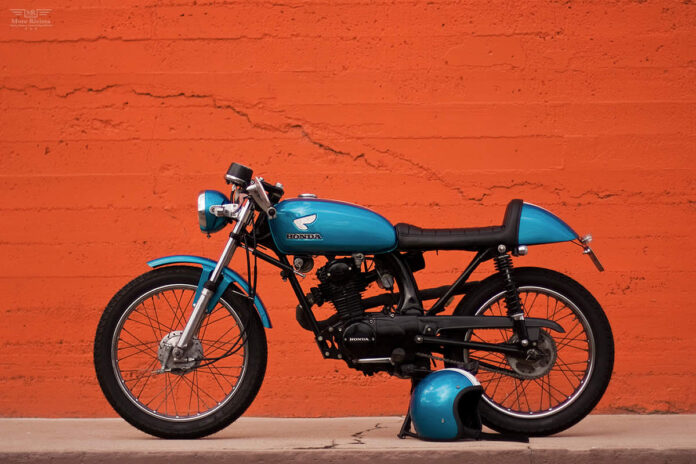 Flying J Customs based in Fresno, California is owned and operated by Jason and his wife. Jason is in to old motorcycles and loves to fix them up and give them a new lease on life.

Jason and I have something in common we share the same passion and addiction for motorcycles, except he is the one who is also building some really cool motorcycles! Someday…I will start my own custom shop but that’s after I learn how to bend and weld!

Lets focus on today’s bike ‘Big Blue’, a 1974 Honda CB125 Cafe Racer. So the story goes like this, Jason told his wife he scored this 1974 Honda CB125 when he purchased 2 retro helmets and the guy threw in the bike for free. She didn’t believe him but I think it’s a great story and quite convincing (lol).

Before the customization there is one divine ritual that needs to be performed and that is firing up the bike. Jason rebuilt the carb and did a little tinkering and got this classic beauty fired up.

For this build Jason was going to follow the Café Racer root. To begin with the build the electrics were converted from 6 volts to 12 volts. Jason slapped a CB100 tank and dropped it down by ¾ inch in the front. The bike also features a fiberglass tail from Airtech which was heavily customized to form great lines.

Later the bike was stripped down, the engine was soda blasted, coated with primer and was painted semi gloss black. A set of 27mm Chinese clip-ons were used and modified to keep the internal throttle. Finishing touches included all new cables, a new set of shocks, LED lights and a custom upholstered leather seat. Last but not least the paint job, which was decided by Jason’s wife and looking at the picture you can tell that she knows how to dress her man!

Jason is working on a few more bikes and we will keep a close eye on him. Please let us know your thoughts about the bike, for further reading on this build see Do the Ton.