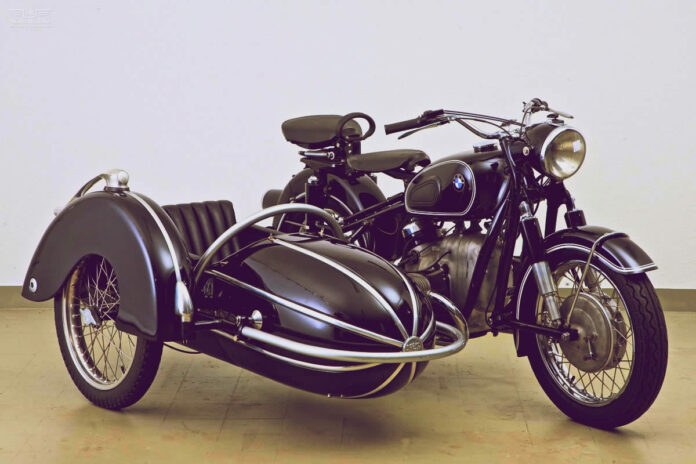 We have seen a couple of sidecar combinations on Moto Rivista, with the most notable being the 2011 AMD World Championship Winner (modified Harley-Davidson Class) ‘Union’ by Abnormal Cycles.

Since then we have had a bit of a thing for these sidecars and today we are taking a look at one that was auctioned recently at the Bonhams auction event at the BMW Museum in Munich on October 1st, ‘1968 BMW R50/2 with sidecar’.

In the early 1950s, BMW concentrated on refining what were essentially pre-war designs. During 1955 a number of new developments were introduced, the BMW R50 and the BMW R69 with a displacement of 494 cc and 594 cc, they were equipped with the improved engine, which was based on the BMW R51/3. The newcomers inherited the up-dated flat-twin engine introduced on the R51/3 a few years previously, but deployed this in all-new cycle parts, the most notable departures from preceding practice being an Earles-type leading-link front fork and swinging-arm rear suspension enclosing the driveshaft in the right leg – developments first seen on the works racers.

The twins carried on with the only minor detail changes for the next few years and until August 1960 an entirely new and much improved engine was announced. The ‘500’ continued thereafter as the R50/2 and the ‘600’ became the R69S, while a high-performance of the former, the R50S, was added to the range.

The BMW R50/2 the ‘sidecar combination’ was purchased by the current owner at Bonhams’ sale of the Willy Neutkens Collection at the BMW Museum, Munich in November 2009. The machine has formed part of his private collection since then and was offered with Netherlands registration papers (1968 and 1975). The final sale price was €18,975 inclusive of Buyer’s Premium.