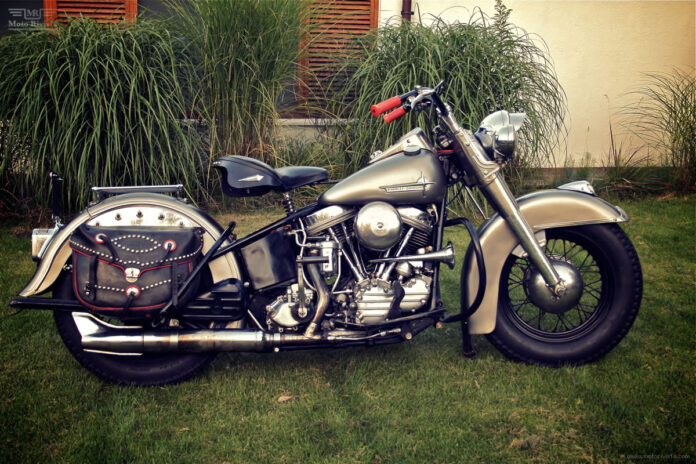 Copenhagen based Customs from Jamesville has it all Hotrods, shows and custom motorbikes. Building “Old School” custom bikes or restoring something like this ‘1956 FL Panhead’ is what James does on a daily basis.

According to James “This 1956 FL Panhead bike was kind of a barn find…..ish, it was in a barn but not like an old run down one and it had not been started in five or so years. It is a funny bike because it was like someone took the most beautiful Panhead parts from all the years and put them in one bike if you ask me. Tombstone taillight, 62 tanks, diamond primary cover, Tombstone speedo, etc etc. And they are all original, in fact I would say this bike is 95% original. It was missing some original parts but I soon replaced them from the stash. I got it for a very good price but after stripping it down I discovered that the engine was F#€Ked!! The engine case surface where the cylinders sit had a difference of 2mm so they had filled up the low side with aluminum putty. There were cracks all the way down the right hand side case, and a terrible repair on the other side.

So the cases were out, in fact things were so bad I realized that this was going to be a long-term project and decided to place a running Panhead engine I had into the bike. The tranny which I was told was ‘rebuilt’ had been but with a Shovelhead main shaft…seriously! One- how could you do that? And two how did I miss seeing that when buying the bike?

Old bikes are like life, you get your ups and your downs, there are days I hate old bikes and there are days where you know this is one of the best moments of my life, like when I rode this beauty through the Alps on my way to Linkert Attacks.

This is the first original Harley I have ever owed in 20 years of riding Harleys and I can say I will never make that mistake again, its all the comfort baby ☺”.

Check out the other featured bikes from Customs from Jamesville.