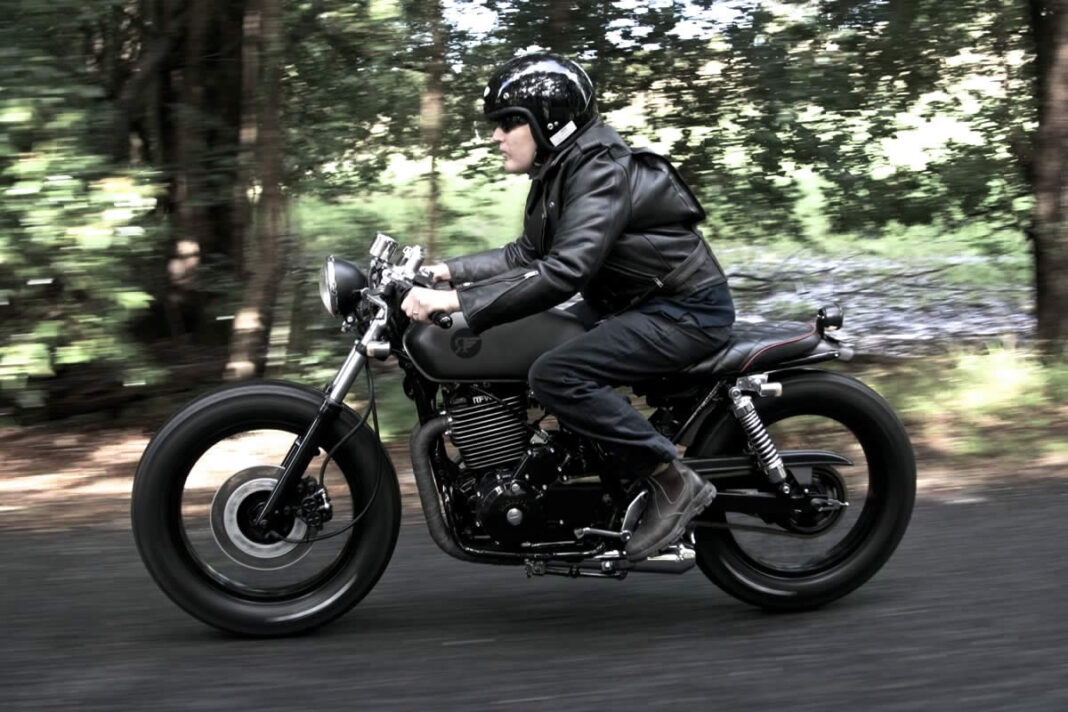 Founded by Maurice Rissman and based in Coffs Harbour Australia is Raider Motorsport, a specialist motorcycle company which imports and exports around the globe for individual customers, motorcycle race teams, private and commercial collectors.

They also design and hand-build a range of reproduction classics, perform custom builds on customers bikes and restore the old forgotten, neglected classics or collectables back to their former glory.

This bike ‘SFX’ was the first Salt-Flat Racer by Raider Motorsport and was built as a first bike for a learner rider, therefore the engine capacity had to comply with government legislation. Maurice choose a Honda GB400, because it has a great engine to work with and an electric start, perfect for a learner as it eliminates the worry about the kick start or stalling!

Like any commissioned work the customer had a list of must haves! Raider Motorsport was given the following instructions; firstly it had to be instantly recognizable as a salt-flat racer, it should have a lot of black but not look like it was dipped in black, a very low seat, twin exhaust and be reliable & suitable for inner city use. With this list in hand Maurice got to work building the customer his dream bike, here’s what he tells us was involved in the build… According to Maurice “After looking at various pictures of Bonneville bikes we decided upon the basic style and then started searching our stock of old fuel tanks to get the look required.  The tank decides how everything else on the bike will look, so once we have it modified sufficiently to mount on the frame the real work can begin.  The GB400 engine, being twin cam, is quite wide so a lot of re-shaping had to be done to the underside of the tank and at the rear where it sits over the frame, this allowed the tank to sit as low as possible.

With the tank mounted we then build the seat base and remove as much of the original frame as necessary to lighten the bike and achieve a minimalist appearance.  Because we remove all OEM items we build our own wiring looms which allows us to place the battery and electrical components where ever we feel is best.  As the GB engine uses an automated decompression system, we can use a battery that almost has the OEM size, which allowed us to fabricate a very small battery box, with the ancillary items concealed in tidy compartments that remain invisible to the observer. After the wiring, seat and tank are worked out, we strip the engine, carry-out improvement to the cylinder head, inlet/exhaust ports, install a modified camshaft that has only small improvement in lift, but wider duration; this will be ideal for inner city use.  From there a great deal of work goes in to achieve a stealth appearance but with sufficient polished alloy and chrome items to create a balance in detail.

The frame is sandblasted and powder-coated, as are the wheels.  Forks, engine cases etc are painted in 2-pack and are sanded with 2000 grit paper and buffed to black chrome finish.  New bearing are installed in steering and wheels and the bike is slowly reassembled.  In keeping with the 50’s era, we decided upon a single small speedometer with LED instrument warning lights that disappear to the casual observer.

The front forks were raised by 50mm to suit the lower rear ride height achieved by installing shorter shocks.  Owing to the way the GB engine sits in the frame, there is quite a lot of room under the engine so we decided to utilize this by placing the exhaust up under the engine exiting just in front of the rear tire.  This allowed us to lower the bike without having the exhaust restrict lean angle”.

The end result is this amazing SFX Salt Flat Racer. We imagine the learner restrictions imposed in Australia are far easier to handle when you have a beautiful bike like this to ride. What a way to learn to ride around Melbourne city! We really appreciate Maurice taking the time to explain the build to us. This is exactly what we want to read about a bike build and we could never have explained it as well as Maurice…thanks again.